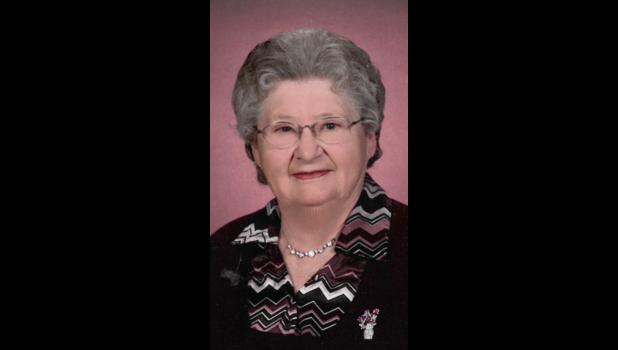 April 17, 1930 —
Jan. 3, 2020
PROTIVIN - Edith Stika, age 90, of Protivin, Iowa, died on Sunday, Jan. 3, 2021, at Accura HealthCare of Cresco, Iowa.
A Mass of Christian Burial will be held at Holy Trinity Catholic Church, in Protivin, on Wednesday, Jan. 6, 2021, at 11 a.m., with Father Nick Radloff officiating. Burial will be held in Holy Trinity Catholic Cemetery.
Visitation will be held on Tuesday, Jan. 5, from 4-7 p.m. at Hindt-Hudek Funeral Home in Protivin, and will continue at the church for one hour prior to the service on Wednesday. Masks are required and social distancing will be followed.
Edith Mae Komarek was born on April 17, 1930, in Howard County, Iowa, the daughter of William and Agnes (Pecinovsky) Komarek. She attended grade school in rural Howard County. On May 3, 1948, she married Edmund Stika at Holy Trinity Catholic Church. They farmed their Century Farm located two-and-a-half miles north of Protivin. They were blessed with five children. In addition to being a homemaker, Edith worked as a cook at The Mint in Protivin for 16 years. She was a lifelong member of Holy Trinity Catholic Church and member of the Domestic Executives Club in Protivin.
To say she enjoyed playing cards is an understatement. She spent many hours playing with family at her house and with friends downtown. Edith was not afraid to bid while playing 500, and liked playing many other card games. She enjoyed when family and friends would stop by to visit. She made the best chicken noodle soup and duck. Edith liked to read, put together puzzles, word searches and cutting out stamps for her collection with a special pair of pink scissors. Her pride and joy was her family. She always looked forward to family get-togethers, where shortly after everyone arrived a deck of cards would appear.
Edith is survived by her children, Judy (Linus) Lechtenberg of Fort Atkinson, Iowa, Alvin (Ilene) Stika of Nashua, Iowa, Dennis (Carol) Stika of Cresco and Carol (Patrick) O’Donnell of Nora Springs, Iowa; grandchildren, Vicki (Rick) Dirksen, Karla (Jon) Peterson, Chad (Cyrilla Meyer) Lechtenberg, Amy (Mike) Sabelka, Benjamin Stika, Sarah (Gerald) Balk, Jill (B.J.) Dahl, Cody (Kari) Stika, Casey (Darcy) Stika, Kelsey (Adam) Nelson, Connor O’Donnell and Carly O’Donnell; 16 great-grandchildren, with one on the way; sister, Leona Gesing of Waukon, Iowa; sister-in-law, Dorothy Stika; brother-in-law, Art (Rosie) Stika; and numerous nieces and nephews.
She was preceded in death by her parents, William and Agnes Komarek; father and mother-in-law, Joseph and Philomena Stika; husband, Edmund in 2003; son, David Stika in 1988; grandson, Andy in 2013; brother, Leonard Komarek in 1942; sister, Alice (Roger) Praska; brothers-in-law, Joseph Gesing and Robert Stika Sr.; and many nieces and nephews.