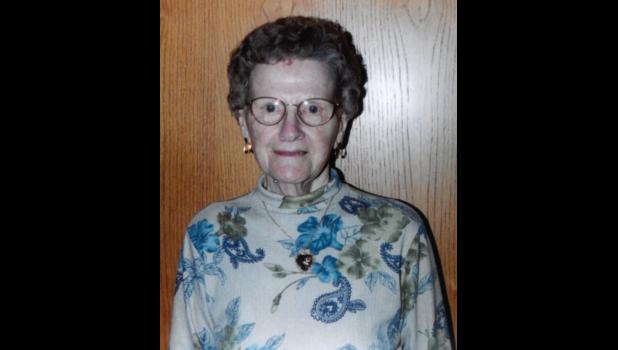 April 23, 1023 —
July 18, 2017
Lime Springs -  Elsbeth Richter, age 94, of Lime Springs, Iowa died on Tuesday, July 18, 2017, at her home.
Funeral services will be held at 11 a.m. on Saturday, July 22, 2017, at St. Paul Lutheran Church in Lime Springs, with Pastor Donna Ihns presiding. Burial will be in Pleasant Hill Cemetery Lime Springs. Visitation is from 5-7 p.m. on Friday, July 21, 2017, at Hindt-Hudek Funeral Home Cresco, Iowa and will continue one hour prior to the service at the church on Saturday.
Elsbeth Fiddelke, the daughter of Fred and Sophie (Stoeckmann) Fiddelke, was born April 23, 1923, in Germantown, Iowa, the youngest of 10 children. She was baptized May 6, 1923, and confirmed May 3, 1937, at St. John’s Lutheran Church in Germantown, and received her education in St. John’s Parochial School.
On Aug. 16, 1942, she married Lawrence Richter at St. John’s Lutheran Church. Elsbeth always said she married Lawrence for his money as he had $12.00 and she had none. They spent their honeymoon mowing the church cemetery. In early September, Lawrence was inducted into the Army, and during the next three-and-a-half years, Elsbeth followed him to the different bases when he was stationed in the United States. Following those years, they returned to farm near Germantown. To this union three sons were born, Larry, Randall and Tim. In early 1959, the family moved to the farm southwest of Lime Springs.
Elsbeth loved gardening, flowers, quilting, dancing and was active in her church. Her house was always spotless. She ran a tight ship, and insubordination was not tolerated. In February of 1994, she and Lawrence moved to Lime Springs where she enjoyed an active life involving Senior Citizens, playing cards, embroidery and happy hour. Since 2005 Elsbeth has made 80-plus quilts, which she lovingly gave to friends and relatives and donated to organizations for fundraisers.
Elsbeth is survived by her sons, Larry (Virginia) of San Antonio, Texas and Tim (Sue) Richter of Lime Springs; daughter-in-law, Connie Richter of Lime Springs; seven grandchildren; five great-grandchildren; and special friends, Betty Roesler, Elaine Niewoehner, Kris Kraft, Connie Bakken and her Happy Hour Family.
She was preceded in death by her husband, Lawrence Richter in 1999, and son, Randall Richter in 2014.
In lieu of flowers, memorials are preferred to Howard County Hospice, Chester or Lime Springs Fire Department and Pleasant Hill Cemetery.
Elsbeth has run the good race and she really ran. She wanted no tears but wanted everyone to give thanks for what God has done for her.