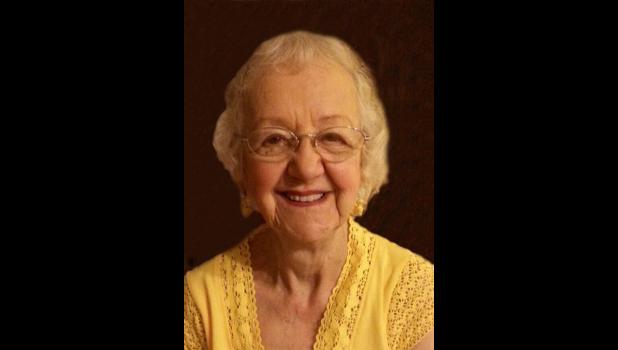 Feb. 2, 1923 —
May 15, 2020
ELMA - Elsie Ludwig, age 97, a longtime resident of Elma died Friday, May 15 at Afton Oaks Assisted Living Center in Elma, Iowa.
A private Memorial Mass of Christian Burial will be held on Friday, May 22, 2020 at Immaculate Conception Church in Elma. There will be a rolling visitation from 9:30-11 a.m. at the church on Friday prior to the memorial mass. Memorials may be directed to the family for designations to be made at a later time. Pease join the family on Facebook Live at 11 a.m. on the Conway-Markham Funeral Home page, where online condolences may also be left.
Due to the current restrictions, burial will be held at a later date at Lourdes (Iowa) Catholic Cemetery.
Elsie was born on Feb. 2, 1923 to Frank and Rose (Ondrashek) Valvoda and was raised on a farm near Cresco, Iowa. She was united in marriage to Joe Ludwig Jr. on June 6, 1944, and together they raised six children. During their marriage, she was a farm wife from 1950-1970 on property two miles outside of Elma before moving into Elma.
Elsie was Joe’s right hand for many years, keeping the books in line and going on parts runs for Ludwig Plumbing and Heating. She was active in Immaculate Conception Catholic Church. She had an eye for antiques and loved to collect them. After retiring, they enjoyed their winters in Florida for over 32 years. She made many friends there and loved socializing with them.
Elsie enjoyed playing euchre, creating Halloween costumes for masquerade parties and going to dances. Everyone knew who she was.
Survivors are her husband, Joe Ludwig of Elma; her sons, Tom (Lori) Ludwig of Bradenton, Fla. and Jerry Ludwig of Ossipee, N.H.; daughters, Joanne (Bill) Rausch of Little Rock, Ark, Jean (Kevin) Loes of Mason City, Iowa and Susie Ludwig of St. Cloud, Fla.; 10 grandchildren; and 17 great-grandchildren.
She was preceded in death by a daughter, Rosemary (John) Gansen in 1974, and two sons who died at birth in 1949 and 1951.