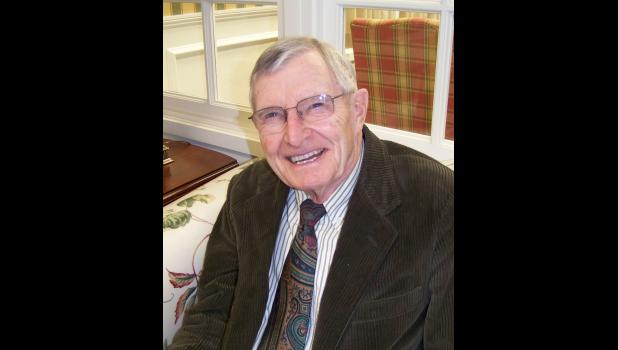 May 21, 1928 —
March 30, 2017
Cresco -  John Thomson, age 88, of Cresco, Iowa passed away on Thursday, March 30, 2017 at the Regional Health Services of Howard County in Cresco, Iowa.
Funeral services will be held on Saturday, April 8, 2017 at 11 a.m. at Notre Dame Catholic Church in Cresco. Friends may call from 4-7 p.m. on Friday, April 7, 2017 at Lindstrom Funeral Home in Cresco, as well as one hour prior to services at the church. Burial will be in Oak Lawn Cemetery in Cresco.
John “Jack” Hughes Thomson was born May 21, 1928 to John Perce and Myrl (Hughes) Thomson in Cresco. He graduated from Cresco High School in 1946 and went on to attend the University of Iowa, where he graduated with an economics degree. While at Iowa, he spent four years in the ROTC and received a commission as a 2nd lieutenant.
After graduating in 1950, he traveled to Texas and worked at Pacific Finance Company while also teaching dance at the Arthur Murray Dance Studio. He was called to active duty and served two years in the infantry. He was responsible for the weapons platoon on the front lines of the Korean War for six months.
In 1953, he returned home to the family banking business that, at the time, was run by two Thomson families. He joined his father, Perce, his Uncle Art, and Art’s son, Jean, at the Cresco Union Savings Bank. He started in the back room, sorting and posting, then worked as a teller and made an occasional installment loan.
He was a Scout Master of troop 63, where he was proud of his five Eagle Scouts.
In 1958, he married Frances Jo Baker from Decorah, Iowa. To that union one son, John Scott Thomson was born in 1960.
Jack was one of the founding members of the Cresco Industrial Development Corp- oration and led the committee to secure the new Donaldson plant in Cresco in 1966. In 1970, he purchased a majority share interest in Cresco Union Savings Bank. He served as president of CUSB from 1970-1980, while also being the CEO from 1970 until the time of his death.
He and Dale Turnmire, Executive Director of the CIDC, went to Grand Meadow, Minn. and talked with Featherlite Trailers owner, Conrad Clement, about moving his corporate office to Cresco. A deal was done, and Featherlite moved it to Cresco in 1994.
In the 1990s, at a town hall meeting (in the then CUSB Annex), Jack offered to pay half the cost of a new indoor pool if the community would match the other half. In December 1997, the Cresco Fitness Center and the Thomson Pool opened.
In 2012, he received the Outstanding Community Service Award. He was active in numerous state and community committees such as the Cresco Theatre Commission, the Cresco VFW, Cresco Kiwanis, Cresco Chamber of Commerce and Cresco Country Club. He was one of the founding members of the Norman Borlaug Heritage Foundation and went on to become the state representative for the foundation.
Dale Turnmire, former CIDC Executive Director and golfing partner for over 60 years, says, “Those who truly knew Jack knew him to be a tireless supporter of Cresco, both in personal endeavors and also his financial investment in the community, which we all were the beneficiaries of.”
Jack enjoyed golfing, fishing, skiing, traveling the world with his wife, Frannie, and spending time with good friends. He loved spending time with Scott’s family and watching his grandchildren excel in the classroom and in athletics.
He is survived by his son, John Scott (Stephanie) of Cresco, and their children, Samantha Scott Thomson of Raleigh, N.C., John Steven Thomson of Cedar Falls, Iowa and William Ian Thomson of Cresco; and a nephew, Guy Thomson (Mindy) Solie of Durham, N.C. and their three adult children, John Thomson (Ashleigh) Solie and their daughter Lucy, Laura (Chad) Quinn and Sam Solie.
He is preceded in death by his parents; wife, Frances Joe Thomson; sister, Mary Thomson Solie; and niece, Susan Solie Boyd.
In lieu of flowers, memorials may be directed to the Norman Borlaug Heritage Foundation, The United Methodist Church or HOCA.