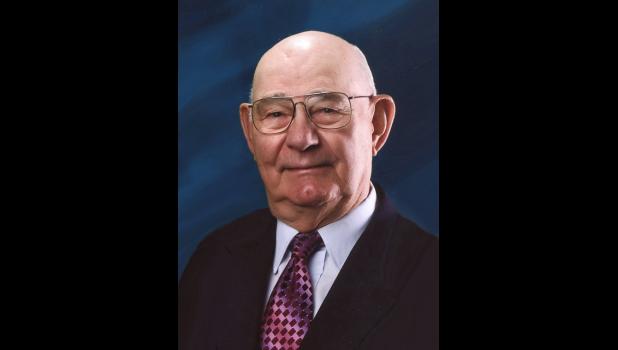 July 2, 1925 —
Sept. 24, 2020
RIDGEWAY - Joseph “Joe” Hauber, age 95, of Ridgeway, Iowa, passed away on Thursday, Sept. 24, 2020 at the Barthell O.E.S Home in Decorah, Iowa.
Mass of Christian Burial was held on Sept. 29 at St. Wenceslaus Catholic Church at Spillville, Iowa, with Rev. Robert Gross officiating. Interment was in the church cemetery.
Joseph Hadwin Hauber was born on July 2, 1925, the son of Leonard and Colletta (Tierney) Hauber on the family farm near Ridgeway. He attended St. Wenceslaus Catholic School in Spillville and graduated in 1943 from Calmar High School. He continued to work on the home farm with his parents and brothers, Dwayne and Vincent. In addition, Joe was the first rural school bus driver for South Winneshiek Schools. On May 12, 1948, he was united in marriage to Hattie Silhacek at St. Wenceslaus Catholic Church, and they were lifetime members of the parish.
Together they farmed near Ridgeway and raised their five children. Joe’s first sales position was with Archer Oil Company. In 1965, he accepted the parts manager position with Case Power and Equipment of Decorah, evolving into the management position. In time, Joe was recognized as one of the top managers, not only regionally but nationally. He retired from the Case organization in 1988.
He served as President of South Winneshiek School Board, Silvercrest Board of Directors and other organizations. Joe’s passion was his commitment and involvement in the community, which included 4-H leader, St. Wenceslaus Church and School, St. Clements Church, The Inwood Ballroom Board of Directors and the development in the Spillville Sr. Housing Project among others. He endlessly volunteered with activities to better the community, parishes and their organizations.
Joe was an avid lifetime golfer to say the least and golfed well into his 90s. Surely many business “deals” were sealed on the links. He enjoyed traveling with Hattie to numerous locations throughout the United States, Europe, Africa, Australia and Spain among others. After retirement, they enjoyed heading south to Texas each January for 17 years, where they resided over the winter months.
They remained on the home farm well into the later portions of their lives. Joe especially cherished all of the grandchildren and great-grandchildren and was so proud of his own children as well. His lifelong Catholic faith and devotion were evident in all aspects of his life.
Joe is survived by four children, Larry (Roxanne) Hauber of Decorah, Linda England of Janesville, Iowa, Tim (Natalie) Hauber of Grimes, Iowa and Tom (Nancy) Hauber of Decorah; grandchildren, Kerry (David) Tantillo, Chad Hauber, Keith Hauber, Rachel Hauber and Christopher (Dawnelle) Hauber, Lance and Lee England, Jacqueline (Adam) Hale, Logan and Lexie Hauber and Analese, Powell, Tira and Salisa Hauber; great-grandchildren, Jordin Hauber, Hayden and Tempest Hauber, Roman, Leighton and Lily Tantillo, Kaleb and Elizabeth Hauber, Eithan and Kadience Hauber and Nolan and Case Hale; one brother, Vincent Hauber of Ridgeway; and one sister-in-law, Phyllis Hauber; along with many nieces, nephews and great-nieces and nephews.
He was preceded in death by his wife, Hattie Hauber; youngest son, Randy Hauber; his parents, Leonard and Colletta (Tierney) Hauber; one brother, Dwayne Hauber; son-in-law, Richard England; in-laws, Wenzel and Mathilda (Panosh) Silhacek; and brothers- and sisters-in-law, Edward and Mildred Silhacek, Jim and Louise Silhacek, Clinton and Mary Leuenberger, Sister Regina Marie OSF and Patricia Hauber.