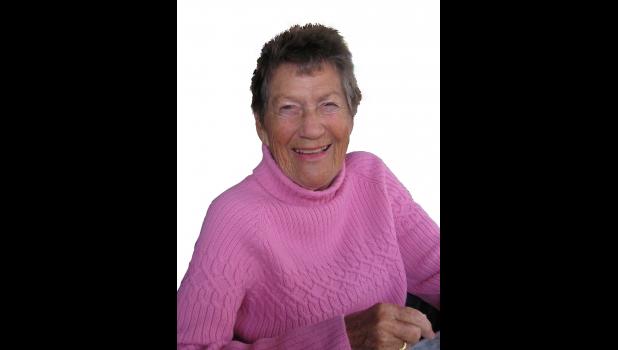 March 2, 1923 —
Nov. 10, 2020
LAKEVILLE - Lois E. Anderson, age 97, passed away peacefully on Nov. 10, 2020 at Kingsley Shores Senior Community Apartments in Lakeville, Minn., where she has lived since 2015.
Lois was born on March 2, 1923 at Iowa Methodist Hospital in Des Moines, Iowa. In 1925, her family moved to Newton, Iowa, where she attended elementary school. As the Great Depression set in, the family moved to Elma, Iowa, where she graduated from high school and held perfect attendance at Elma Methodist Church Sunday school.
While living in Elma, she met and began dating Fred Elwood of Cresco, Iowa. Lois attended Drake University in Des Moines for one year until the outbreak of World War II. She then began working at Banker’s Life Insurance Co. The couple was married on March 4, 1943. Fred then enlisted in the Army and was stationed at Ft. Snelling in Minneapolis, Minn. Lois also moved to Minneapolis and worked for an attorney and for defense projects.
After Fred was discharged, they moved to Cresco, where Lois was a member of the Congregational Church and sang in the choir. She was a member of P.E.O., and at the age of 40, she began flying and proudly passed the flight test to get her F.A.A. certified pilot license. She also sewed draperies for the custom homes Fred built and costumes for their daughters’ dance recitals.
After Fred passed away in 1969, being inspired by her love of Florida, Lois moved to Ft. Myers Beach. She met Jim Anderson on the beach in 1971 and married him May 6, 1974. In 1976, they purchased The Shoreline Apartments, where they lived for a few years and rented out apartments.
Lois purchased a condo at The Privateer in 1981 and lived there until 2015. In the 1980s and 1990s, she was very successful in the real estate business. She happily celebrated her second 25th anniversary, this time with Jim, while enjoying the “Good Times” (their boat).
She is survived by daughters, Kathryn L. (Ted) Henry of Prior Lake, Minn. and Barbara C. (Mike) Tuinstra of Cheyenne, Wyo.; sister, Kathryn (Kay) Finch; grandchildren, Kimberly (Brock) Rendall, Heather (Bill) Frost, Jennifer (Ken) Fechtner and Stephanie (Chris) Brown and great-grandchildren, Mikayla, Tianna and Isabelle Rendall, Kamrie, Lilliana and Adelyn Frost, Brayden, Brooklynn and Brielin Fechtner and Brantley and Breslyn Brown; along with stepchildren, Rocky Anderson, Jimmy Anderson and Jan Juric and their children and grandchildren.
Lois was preceded in death by her parents, Lowell Carter, DDS and Mildred Stimson Carter; sister, Marjorie McCormack; brother, Bruce J. Carter; first husband of 26 years, Frederick C. Elwood; and second husband of 35 years, Jim Anderson.
Lois was cremated per her wish, and no service was held. A family gathering will be planned at a later date.