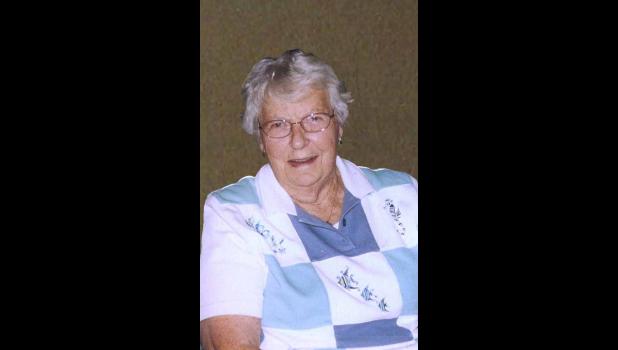 Sept. 13, 1928 —
July 4, 2020
DECORAH - Lois A. Gunhus, age 91, of Decorah, Iowa, passed away peacefully with family by her side on Saturday, July 4, 2020 at Aase Haugen Senior Services in Decorah.
Funeral Services were held on Friday, July 10, 2020 at Decorah Lutheran Church with Rev. Peter Kowitz officiating. Burial was in Lutheran Cemetery in Decorah.
Lois Avonne (Steinmetz) Gunhus was born on Sept. 13, 1928 to Leonard and Sigrid (Otteson) Steinmetz in Winneshiek County, Iowa and was baptized and confirmed at Immanuel Lutheran Church in Cresco, Iowa. She attended Orleans Township country school through eighth grade and graduated from Cresco High School in 1946. After graduation she began working at Cresco State Bank.
Lois married Herbert Chyle in 1949 at Immanuel Lutheran Church in Cresco. In 1951 she moved to Norfolk, Va. to join him while he served in the Navy aboard the USS Mt. Olympus. In Norfolk she worked at the National Bank of Commerce. After Herb was honorably discharged from the Navy in 1952, they moved to Dubuque, Iowa, where she worked at Federal Discount Corporation. In 1955 they moved to Decorah, to raise their two children, Craig and Crystal. Herb passed away in 1968. Lois continued to work various jobs in Decorah including Interstate Power, Decorah Newspapers, Federal Land Bank and lastly Bob’s Standard, as a bookkeeper for 19 years, retiring in 1992.
She married Larry Gunhus on May 3, 1975 at Cresco First Lutheran Church and combined families with Craig and Crystal Chyle and Bruce, Kristi and Valerie Gunhus, all serving as attendants in their wedding. The couple grew up on close neighboring farms. Both of their first deceased spouses died at the age of 40, with each being married for 20 years.
She and Larry loved to fish in northern Minnesota at Campbell Lake. They liked to dance to the big band music of the 1940-50s and take bus trips. One of her joys was walking with friends and having coffee. Lois was also an avid crossword puzzle person and enjoyed baking. She was a 65-year member of Decorah Lutheran Church, having taught Sunday school and Bible school and served on the Dorcas Circle. She became a resident of Aase Haugen Senior Services in Decorah in October 2016. She was a wonderful and loving wife, mother, grandmother, aunt and friend. She will be greatly missed.
Lois is survived by her husband, Larry; her children, Craig (Sarah) Chyle of Decorah and Crystal (Bill) Wetherington of Cresco; and stepchildren, Kristi Lepa of Cresco and Valerie Gunhus of Waukon, Iowa. She is also survived by grandchildren, Caleb, Camrin and Chloe Chyle; Aaron and Tristan Wetherington of Cresco, Christopher and Jessica Wetherington of Colorado and Beirgen Gunhus-Dansdill; one great-grandson, Riley Carver of Colorado; two sisters, Marion (Ron) Wibben of Stewartville, Minn. and Janet (Bob) McFadden of Leawood, Kan.; two sisters-in-law, Yvonne Steinmetz of Lincoln, Calif. and Gelene Gunhus of Cresco; and many nieces and nephews.
Lois was preceded in death by her parents; her husband, Herb in 1968; brothers, Leonard Jr. (Adah), Harold “Hoop” (Phyllis), Robert “Bob” and Charles “Chuck;” stepson, Bruce Gunhus in 2013; in-laws, Charles and Alma Chyle and Art and Evelyn Gunhus; and brother-in-law, Duane Gunhus.
Memorials may be directed to help with Parkinson’s disease. Make a check out to the Parkinson's Foundation and mail to Parkinson's Foundation, 200 SE 1st Street, Suite 800, Miami, FL 33131.
Online condolences may be made at www.fjelstul.com.