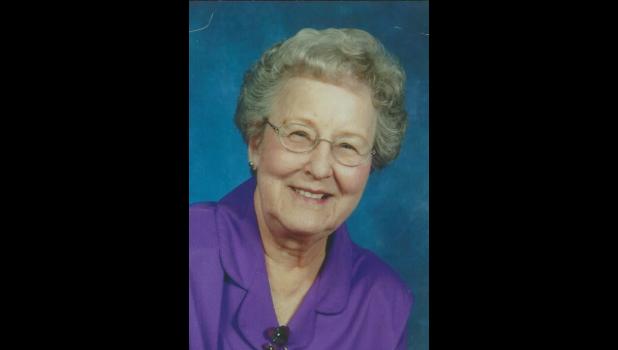 April 4, 1925 —
Jan. 3, 2021
LIME SPRINGS - Phoebe Klomp, age 95, formerly of Lime Springs, Iowa, passed away on Sunday, Jan. 3, 2021 in Edina, Minn.
A memorial service with burial at Pleasant Hill Cemetery in Lime Springs will take place at a later date. Lindstrom Funeral Home is assisting the family.
Phoebe (Cook) Klomp was born on April 4, 1925 to Charles and Mae (Nagel) Cook in Fillmore County, Minn.
She attended rural school and graduated from Wykoff High School in 1942, then from teacher’s training at Preston, Minn. and attended Winona Teacher’s College. She taught in rural schools for four years.
She married Clarence Klomp on April 3, 1947 in Rochester, Minn. and moved to Lime Springs. To this union two children were born, Jeffrey of Madison, Wis. and Julie (Timothy) Titcombe of Minnetonka, Minn.
She was baptized and confirmed in the Evangelical Church at Cherry Grove, Minn. and was a member of the Presbyterian Church of Lime Springs, before transferring her membership to St. Paul Lutheran Church at Lime Springs. She was a member of Mary Circle and WELCA. She also served on the Church Council.
She was a past president of the American Legion Auxiliary and a member since 1947.
Phoebe worked for the Lime Springs Herald and was an assistant librarian. In January 1964, she began employment with the Department of Commerce, Bureau of the Census, beginning as a Field Representative and was later promoted to a Field Supervisor and a Regional Technician. She retired in 1990. The highest point of her employment came when she was presented a Bronze Medal for superior federal service in Washington, D.C. in 1987.
From the fall of 1990, she and Clarence spent the winter months in Arizona until his death in 1995.
She is survived by her children, Jeffrey and Julie; two grandchildren, Kristin Titcombe and Mari Lee; one great-grandson, Everett; and one sister, Vivian Bolles of Brainerd, Minn.
She was preceded in death by her husband, Clarence; one infant sister; three brothers, Roland, Victor and Carroll Wayne; and four sisters, Erna Johnson, Lorys Krahn, Alene Wydra and Marian Gardner.
Memorials in honor of Phoebe may be directed to St. Paul Lutheran Church in Lime Springs.