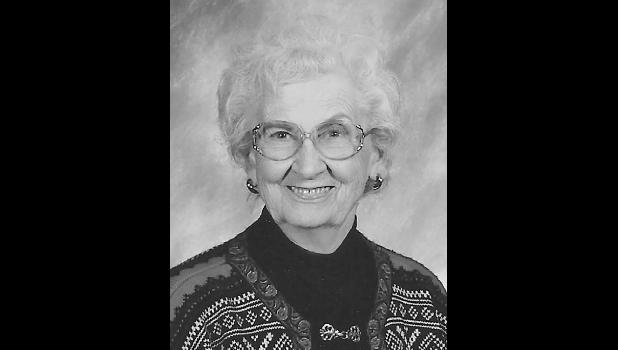 July 5, 1922 —
Sept. 16, 2019
SAN FRANCISCO - Mrs. Phyllis Leslie passed away on Sept. 16, 2019, in San Francisco, Calif., at the age of 97. She was lively and independent until she endured a stroke three weeks before her death. She deliberately chose no medical interventions and serenely said her goodbyes to her five children, who had gathered at her bedside.
A private family interment of her ashes will occur on Nov. 15, 2019, in Fairfield Bay, Ark., beside her husband.
Phyllis Holm was born to Edwin Olai Holm and Minnie Espe Holm on July 5, 1922, in Wright County, Iowa, as part of a large Norwegian immigrant community. Her family moved to Howard County in 1934, near Chester, Iowa. She attended Chester High School, graduating in 1939. After a two-year elementary teacher’s course at Upper Iowa College in Fayette, Miss Holm taught in the Little Cedar, Iowa, school system for two years.
She married Max John Leslie of Chester on June 10, 1943. They farmed in Chester and LeRoy, Minn. before moving to a farm near Cresco. They farmed there for eight years before moving into Cresco in 1960.
At that time, Phyllis began her teaching career again at Westside Elementary in Cresco. During those years, she completed her B.A. in Elementary Teaching with a minor in Psychology at Luther College in Decorah, Iowa, graduating in 1967. At one time, she and her three oldest children were all in college at the same time. She ended her teaching service in the Howard-Winneshiek Community School District at Ridgeway in 1983.
Mrs. Leslie was an active member of the First Lutheran Church of Cresco from 1953-1986, participating in choir and Sunday School teaching.
Phyllis and Max retired to Fairfield Bay in 1986. Their retirement years included much travel — national and international, with a highlight being a sibling and spouses tour to Norway in 1989. Mrs Leslie also volunteered in the elementary school in Shirley, Ark.; was a delegate to the Gray Panther Group that advised the Arkansas State Congress; and volunteered in many Democratic political events.
Mr. and Mrs. Leslie were founding members of Peace Lutheran Church of Edgemont, Ark., where she was a choir member. After 26 years in Arkansas, Mrs. Leslie moved to San Francisco in 2013, where she lived with her daughter, Marcia and Tom Hurley.
Phyllis Leslie lived a long, full and optimistic life. She loved all her family and will be missed.
Phyllis Leslie is survived by her children, Dianne (Hudson) Leslie-Mazwi, Douglas (Elaine Bitzel) Leslie, Marcia (Thomas) Hurley, Alayne (Johannes Sprangers) Leslie and Kent (Jeannine Tetu) Leslie; her sister, Shirley Holm Wells; her brothers, Richard Holm (Georgia Vlahakis) and Roger Holm (Janet Lyons); and many nieces and nephews. She also leaves nine grandchildren, six grandchildren-in-law and 11 great-grandchildren.
She was preceded in death by her husband, Max Leslie; her parents, Ed and Minnie Holm; her brother, Roland Holm; her sister and brother-in-law, Margaret and Robert Freel; her brother-in-law, Stanley Wells; her sisters-in-law, Maribelle Leslie Woehlk and Marjorie Leslie Jensen; and her son-in-law, Hudson Mazwi.