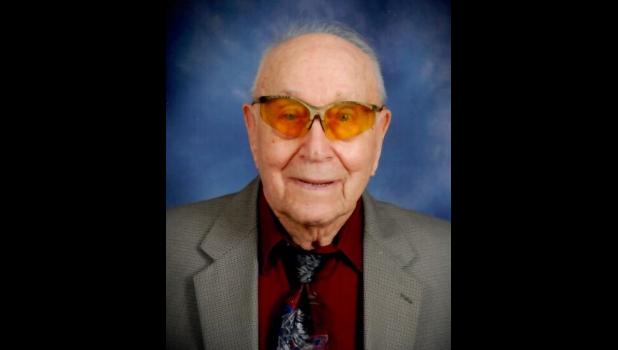 Sept. 24, 1919 —
Aug. 31, 2020
CRESCO - Robert Burdette Bronner of rural Cresco, Iowa, age 100, passed away from complications of COVID-19 on Aug. 31, 2020.
A private family service was held at Lindstrom Funeral Home in Cresco on Sept. 3, 2020 with burial at Cedar Hill Cemetery. Memorials can be directed to Cedar Hill Cemetery.
He was born on Sept. 24, 1919 to Albert and Addie (Schiurer) Bronner in rural Howard County. He farmed and lived for 60 years across the road from the Zion United Methodist Church on the Golden Ridge, northwest of Cresco. He was confirmed and a member there his entire life. Robert married Ione Hoppie on April 17, 1943. To this union, three sons where born. The couple was married 65 years. Ione passed away in 2008.
When he first started farming, Robert milked cows and farrowed sows the old fashioned way. He also raised Cheviot sheep that were shown at the Howard County Fair. Later he raised Hereford and Black Angus stock cows and finished the calves. He was thrilled when he purchased his first tractor, a 1945 Farmall H. Chopping corn in the fall and filling many of the neighborhood silos led to a sore neck and hearing loss, but it never affected playing cards and fishing. Robert and Ione took many bus trips and fishing trips that covered most of the United States. They also traveled to Europe.
Even when his physical health and failing eyesight prohibited him from active involvement in agriculture, he continued to farm every day in his heart. He never lost track of the seasons and the tasks that needed attention. Those who knew Robert will remember his deep, hearty laughter.
He was a member of Howard County Farm Bureau and Howard County Historical Society.
Robert is survived by his three sons, Dennis (Martha Ann) Bronner of Polk City, Iowa, Kelvin (Terri) Bronner of Cedar Rapids, Iowa and Brent (Patsy) Bronner of Cresco; grandchildren, Jason (Anna) Bronner, Jennifer (Chris) McGhee, Nathan Bronner, Luke Bronner, Sarah Bronner and Robyn (Kellen) Wells-Mangold; and great-grandchildren, Keaton McGhee, Leila Bronner, Maya Bronner, Breyker Wells-Mangold and Willa Wells-Mangold.
Robert was preceded in death by his wife; parents; and three brothers, Kenneth, Eldred and Clarence.