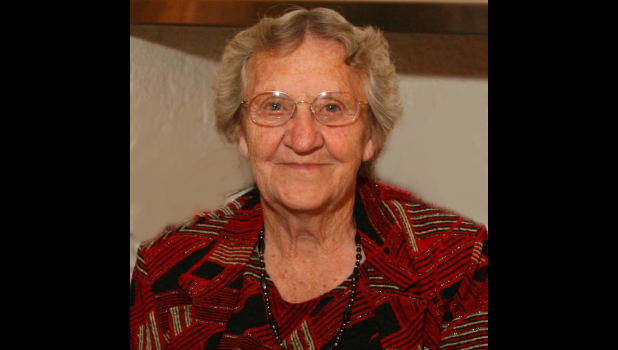 July 1, 1928 —
Oct. 28, 2022
CRESCO - Theona Ann (Bartosh) Mlady, age 94, of Cresco, Iowa passed away on Friday, Oct. 28 at Aase Haugen Senior Services in Decorah, Iowa.
A funeral service will be held on Friday, Nov. 11 at Holy Trinity Catholic Church in Protivin, Iowa at 11 a.m. Visitation will be at 10 a.m. at the church. A luncheon will be at 12 p.m. at the Protivin Community Center. In lieu of flowers and donations, please donate to the Winneshiek County Hospice Medical Center. Online condolences may be left at HindtHudekFH@gmail.com.
Theona Ann (Bartosh) Mlady was born on July 1, 1928, the daughter of Frank A Bartosh and Mary M (Adamec) Bartosh on a farm south of Cresco. She grew up on the farm, assisting her parents. She also helped care for her younger sister, Anastasia Bartosh, who died at an early age. She attended country school and then graduated from Rudolphinum High School of Protivin in 1946. Theona was a 4-H member, played basketball, played the violin and was on the debate team her senior year.
After high school, Theona spent some time in the Winona, Minn. area making oil filters for trains, tractors and cars. Unfortunately she got yellow-jaundice in 1949 and was quarantined at home for some time.
Theona loved old-time music, which continued for the rest of her life. It was at one of those dances of Polka and Waltz where she met her future husband.
Theona was united in marriage to Joseph J. Mlady on March 27, 1951 at Holy Trinity Church. The reception was at her parents farm, south of Cresco. From this union two children were born, Joseph F. Mlady in January 1952 and Wayne J. Mlady in November 1953. The couple crop farmed and raised a variety of other livestock on the family farm south of Cresco.
Theona was known for a large vegetable garden and strawberry bed, which were frozen and canned for the family. She had an egg incubator and raised ducks and geese for the family. Shea loved to sew her own clothes and especially her own wedding dress.
She was preceded in death by her husband, Joseph J. Mlady in June 1984 in a car accident. Theona continued to farm with her son, Wayne, for the rest of her life. Her focus and enjoyment was seeing the farm succeed. She was a very important part of the day-to-day spring, summer and fall harvest. She spent many years running equipment and assisting in getting everything done in a timely fashion. Spring planting, summer growing and fall harvest were rewarding to her garden, her flowers and all the crops out in the fields.
Theona is survived by her children, Wayne J. Mlady of Cresco and Joseph F. Mlady of Brisbane Queensland Australia; five grandchildren, Wendy (Mlady) Grube of Andover, Minn., Steven Mlady of Cresco, Darin Mlady of Ocala, Fla. and Nathan Mlady and Brent Mlady of Brisbane Queensland Australia; nine great-grandchildren, Oliver Grube of Andover, Alexis, Venessa and Brent Mlady of Ocala and Oscar, Louis, Esther, Quinn and Reece Mlady all of Australia; brother, Eugene Bartosh of Moline, Ill.; and various nieces and nephews, grandnieces and nephews and great-grandnieces and neph-ews.