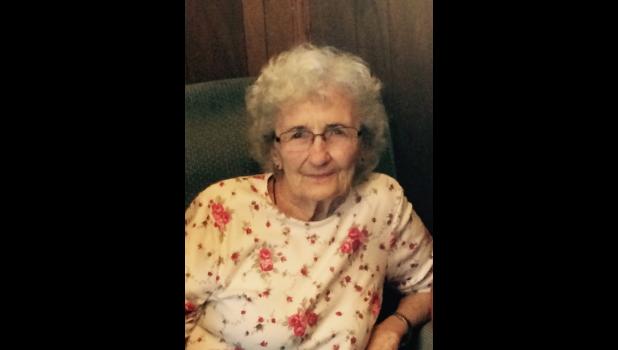 Dec. 12, 1927 —
Oct. 14, 2019
RIDGEWAY - Vivian Grace Elder, age 91, of Ridgeway, Iowa, passed away peacefully on Oct. 14, 2019.
In honor of Vivian’s last wishes, there will be a private graveside funeral for immediate family only and no viewing.
Vivian Grace Fitzgerald was born in Chester Township, Howard County, Iowa on Dec. 12, 1927, and grew up in the areas in and around Lime Springs and Bonair. She attended high school in Lime Springs and graduated from Cresco High School in 1945, where she was in Glee Club and played the trumpet.
After graduation, she worked at The Lind Studio in Cresco. She married Allen Elder on July 3, 1947, and they eventually settled on a farm north of Ridgeway in 1954, where she ended up living for the rest of her life.
On the farm she raised her two children and later, babysat grandchildren often. She tended a garden each year and milked cows (a skill she perfected as a child) by herself every day until 2001, when she was 74 years old. Needless to say, she had a level of grit and perseverance that is rare. In addition to her resilient spirit, she was also incredibly kind-hearted and very charming. She had a twinkle in her eye and lit up a room when she smiled.
While she lived in the same area for most of her life, she possessed an adventurous spirit. She was an avid reader, with a preference for romance novels. She had a lifelong thirst for learning, taking a variety of community education classes, as well as earning a certificate through what is now Northeast Iowa Community College. She was creative, sewing clothing for herself (and for Barbie dolls!) and constructed beautiful quilts for most of her life. She was always dressed stylishly. She was beautiful inside and out.
While she liked being home, she also enjoyed participating in a women’s quilting group and attending United Methodist Church in Cresco.
She loved all those in her life unconditionally. She will be missed dearly. And, as she said at the end of each phone conversation, “Bye for now.”
She is survived by her son, Michael (Nancy Reeve) Elder; four granddaughters, Theresa Elder (Joe) Peplinski, Lisa Elder (Aaron) Melander, Karrie Elder (Peter) McClellan and Holly Elder; five great-granddaughters, Amber Godfrey, Kayla Godfrey, Charlotte McClellan, Vivian Melander and Madeline Melander; sisters-in-law, Therma (Cornwell) Fitzgerald and Lois (Elder) Amundson; and many nieces and nephews and lifelong friends.
She was preceded in death by her son, Raymond Elder; her husband, Allen Elder; her parents, Frank Fitzgerald and Frances (Barrett) Fitzgerald; and her brother, Russell Fitzgerald.
In lieu of flowers, please make a donation to the Phillips Cemetery Fund, c/o Tim Grabau, 18764 65th Street, Lime Springs, IA 52155.