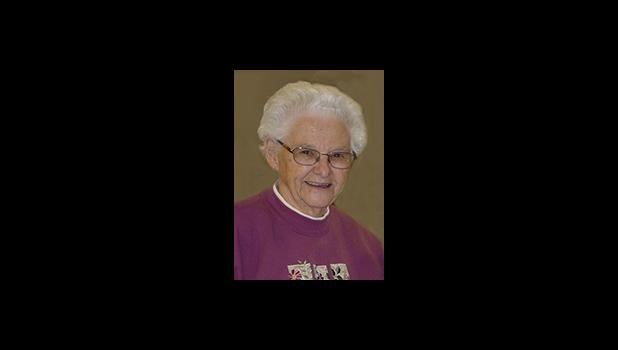 Feb. 3, 1930 —
Oct. 21, 2019
ELMA - Wilma E. Gesell, age 89, of Elma, Iowa, passed away on Monday, Oct. 21, 2019 at Colonial Manor in Elma.
Funeral Services were held on Saturday, Oct. 26, 2019 at St. Peter’s Lutheran Church in Elma, with Pastor Daird Korth officiating.  Burial was in Howard Cemetery at Elma.
Wilma Elizabeth Gesell was born on Feb. 3, 1930 to Julius and Gertrude (Lubbert) Kapka in Riceville, Iowa. She attended school in Riceville and graduated from Riceville High School in 1949.
Wilma worked in Osage, Iowa as a secretary. She married Gilbert Gesell on April 21, 1952 at Maple Leaf Church near Elma. After their marriage the couple lived in Amarillo, Texas until 1954, then they moved back to the family farm near Elma, where they lived and raised their family.
Wilma enjoyed flower gardening, bird feeding, watching wildlife and antiquing with her nieces. She was active in her church and enjoyed bowling with the girls from work. She enjoyed her family time, especially with the grandchildren. She was a member of St. Peter’s Lutheran Church.
Wilma is survived by her son, Roger (Barb) Gesell of Elma; grandchildren, Aaron Gesell, Jessica Knight, Kelly Tucke, Adam Gesell and Becky Hoehne; 13 great-grandchildren; sister, Velda Myers of Riceville; and several nieces and nephews.
She was preceded in death by her parents, Julius and Gertrude Kapka; husband, Gilbert in 1995; sons, Gary and Loren; daughter, Diana; brothers, Lavern and Orville; and sister, Velma Krueger.