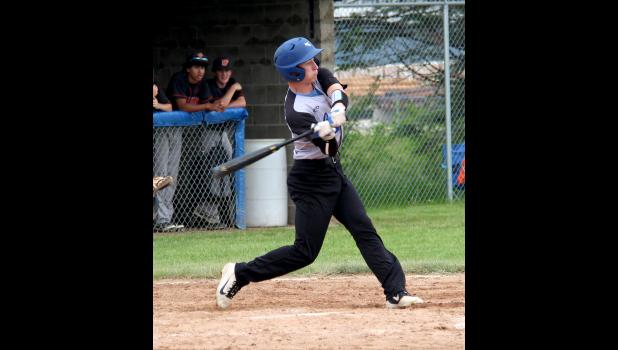 By:
Nate Troy Sports Editor
CRESCO - The Crestwood baseball team was unable to corral the Waukon Indians at home on June 13 as the Indians swept a twinbill, 12-4 and 14-1.
Playing a doubleheader at Decorah on June 17, the Cadets dropped both games. The Vikes edged Crestwood, 3-1, in game one; and they beat the Cadets, 13-2, in game two.
G1: Waukon 12, Cadets 4
In game one, the Indians grabbed a 5-1 lead in the top of the second and continued to build on their lead en route to a 12-4 win.
Crestwood tallied single runs in the second and fourth innings and two runs in the third.
“We were competitive in the game but we just couldn’t get the runs in,” Cadet Coach Gary Steffen said. “Our guys did a good job of putting the ball in play. Waukon made some nice plays on defense to take away some hits from us.
“We also made some baserunning mistakes. Overall, we hit the ball well but Waukon hit the ball better and got timely hits. As a team, we are getting more competitive,” the coach said.
The Cadets racked up 13 hits during the first game. Landen Bergan and Aidan Skoda each had three singles and one run. Bergan had one stolen base.
Ryan Wilson tallied two singles. Cade Korsmo had two singles and one run. Chance Carter had one single and two RBIs. Gage Moser and Dylan Shelton each had one RBI. Caleb Kammerer had two singles, one stolen base and one run.
Carter was the losing pitcher. He went four innings, allowed nine hits, eight runs (six earned), one walk and hit two batters. Korsmo tossed three innings, allowed three hits, four earned runs, three walks and struck out five.
Score by innings
Wk  2 3 0 3 0 4 0 - 12
CW 0 1 2 1 0 0 0 - 04
G2: Waukon 14, Cadets 1
Waukon snagged a 6-0 lead after three innings and sailed to a 14-1 win in six innings in game two.
Crestwood scored its only run in the fourth inning.
“We had two young pitchers, Jaxon Millage and Dashel Donlan, going in game two,” Steffen said. “Jaxon struggled early before settling in. Dashel gave up some walks, which opened the door for Waukon.
“Despite losing both games, we competed well against the Indians. I keep telling our guys that good things will happen if we play the game the right way,” the coach said.
Bergan had two hits. Moser tallied one single and one run. Skoda had one RBI.
Jaxon Millage was the losing pitcher. He went four and one-third innings, allowed seven hits, eight runs (six earned), three walks and hit four batters. Korsmo tossed one-third of an inning. Dashel Donlan pitched one and one-third innings, allowed four hits, six runs (three earned), three walks and hit two batters.
Score by innings
Wk  3 2 1 0 2 6 - 14
CW 0 0 0 1 0 0 - 01
G1: Decorah 3, Cadets 1
Game one was a scoreless pitcher’s duel until the Vikings plated two runs in the fifth and held on for the 3-1 victory.
Crestwood scored its only run in the top of the sixth inning.
“Decorah is a solid team that plays good defense and hits the ball well,” Steffen said. “Our pitcher, Chance Carter, threw one of his best games of the season and mixed his pitches well.
“We got one run in the sixth and had a chance to score more with baserunners on second and third. Unfortunately, we couldn’t get the big hit to score a couple more runs. Still, I was happy to see our guys battle and compete throughout the game,” the coach said.
Moser tallied two hits and one stolen base for the Cadets. Carter had one RBI. Kammerer had one single, one run and drew one walk. Korsmo drew one walk and had one stolen base.
Carter was the losing pitcher. He went six innings, allowed six hits, three earned runs, one walk, hit four batters and struck out two.
Score by innings
CW   0 0 0 0 0 1 0 - 1
Dec   0 0 0 0 2 1 x - 3
G2: Decorah 13, Cadets 2
In game two, Decorah plated five runs each in the third and four innings on their way to 13-2 win in five innings.
Crestwood scored single runs in the third and fourth innings.
“Decorah pounded the ball early and we struggled to keep up with them,” Steffen said. “On the positive side, we are improving.”