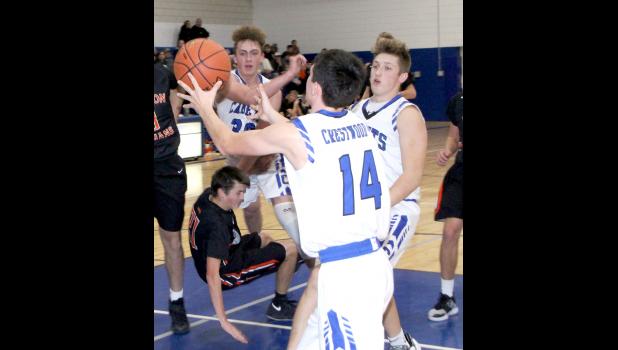 By:
Nate Troy Sports Editor
CRESCO - After a slow start, the Crestwood boys’ basketball team kicked it into high gear in the second period and sailed to a 64-38 win over Waukon on Dec. 17 at home.
The win improved the Cadets’ overall record to 4-2 and 1-1 in the Northeast Iowa Conference. Crestwood will play at Forest City on Jan. 2 and face Dike-New Hartford at Upper Iowa on Jan. 4. The next home game will be Jan. 6 against Lyle-Pacelli.
The Indians took an early 4-2 lead before the Cadets cut Waukon’s lead to 13-12 at the end of the first period. Crestwood opened the second period with an 11-4 run to take a 23-17 lead and pushed its advantage to 32-21 at halftime.
In the third period, the Cadets went on a 15-8 run to extend the lead to 47-29 going into the fourth.
Crestwood Head Coach Lynn McCormick said making defensive adjustments helped the team.
“We switched defenses by going to a zone,” McCormick said. “We were able to get good pressure on Waukon that way. We only gave up 38 total points, which was outstanding.
“We also rebounded the ball well, which was a big key. When we got those rebounds, we were able to run the floor well, especially in the second half. Carter Henry is hard for opponents to handle on offense. When he gets in the open and finds his teammates, that makes us a hard team to beat. We had balanced scoring, which was great to see. It was a great team win,” the coach said.
Carter Henry tallied 13 points, had nine rebounds, nine assists and one block for the Cadets. Reid Wiley had 11 points, including one three-pointer, eight assists, four steals and two blocks. Lawson Brown tallied 11 points, including one three-pointer, had five assists and two rebounds.
Kade Munkel had 11 points and four rebounds. Garret Ollendieck tallied nine points, including one three-pointer, had 10 rebounds, five steals and three assists. Landon Simiele had four points. Lucas McGee had three points and two rebounds. Gabe Grabau scored two points and two assists. Ashton McConnell and Mason Peter each had one rebound.