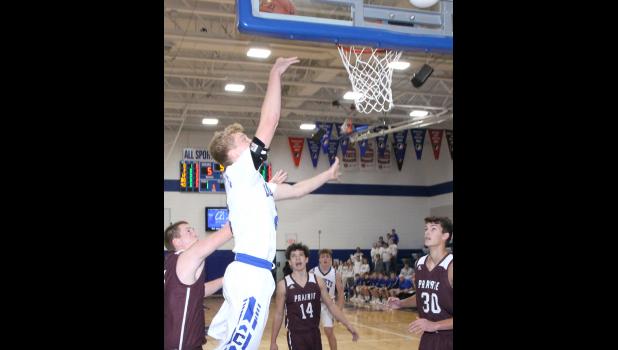 By:
Nate Troy Sports Editor
DENVER - The Crestwood varsity boys’ basketball team shook off a slow start to crush Denver, 81-53, on Dec. 3 in its season opener.
Battling North Fayette Valley on the road on Dec. 5, the Cadet boys’ squad chalked up a 72-58 win.
Facing Prairie du Chien at home on Dec. 7, the Cadets held a three-point lead until the Blackhawks tied the game on a three-pointer at the end of regulation. In the overtime, PDC went on a 9-3 run to down the Cadets, 67-61.
Cadets 81, Denver 53
Denver grabbed an 18-14 lead after one period before the Cadets went on a 20-11 run in the second quarter to take a 34-29 halftime lead. In the third period, Crestwood took advantage of a 23-11 run to push its lead to 57-30 going into the fourth on its way to the win.
“We started the game slow and fell behind Denver 15-4 in the first quarter,” Cadet Head Coach Lynn McCormick said. “We settled down after that and played better on defense. We also got our running game going on offense and got some points on fast breaks. Everyone contributed to the win. It was a nice way to start the season.”
Reid Wiley led the Cadets with 24 points, including two three-pointers, had seven rebounds and two assists. Carter Henry tossed in 21 points, had eight rebounds and four assists.
Kade Munkel had 13 points and five rebounds. Garret Ollendieck had 12 points, seven rebounds, five assists, four steals and one block. Andy Osmonson had nine points, including one three-pointer, five rebounds and three assists. Mason Peter had two points. Landon Simiele and Bryer Thompson each had two assists.
Score by quarters
CW  14  20  23  24 - 81
Den  18  11  11  13 - 53
Cadets 72, NFV 58
The Crestwood boys’ team improved to 2-0 with a 72-58 win over NFV on Dec. 5.
The Cadets led 25-15 after one period, took a 40-35 halftime lead and pushed their advantage to 60-44 at the end of the third.
“Offensively, we scored 72 points, which is not too bad,” McCormick said. “However, on defense, we didn’t play as well as we did against Denver. We never seemed to get in the flow of the game, but we still moved the ball well on offense. We need to play better on defense.”
Reid Wiley tallied 14 points, including one three-pointer, had three assists and two rebounds. Landon Simiele had 14 points, one rebound, one assist and one steal. Garret Ollendieck had 11 points, including one three-pointer, six rebounds and three assists.
Carter Henry tallied 13 points, six rebounds, eight assists and five steals. Kade Munkel had seven points, three rebounds, two assists and one block. Gabe Grabau had six points and two rebounds. Andy Osmonson had four points, one rebound and one assist.
Mason Peter had three points on one three-pointer. Lawson Brown had two rebounds and two assists. Bryer Thompson had four assists.
Score by quarters
CW   25  15  20  12 - 72
NFV 15  20  09  14 - 58
PDC 67, CW 61 (OT)
Crestwood held a 58-55 lead late in the fourth quarter before a late three-pointer by Prairie du Chien tied the game at 58-all at the end of regulation. The Blackhawks took control in overtime to earn a 67-61 win.
The Cadets trailed 23-25 at halftime before going on a 19-15 run in the third period to take a 42-40 lead entering the fourth. Crestwood took a 53-47 lead midway through the fourth before PDC cut the Cadets’ lead to 57-55 with 51 seconds left.
Carter Henry made one free throw with 37 seconds left to make the score 58-55, but the Blackhawks hit the game-tying three-pointer with two seconds left to send the game into overtime.
“Defensively, we didn’t play well,” McCormick said. “We didn’t rebound as well as we should have and we let Prairie du Chien hit a few big shots, including the one at the end of regulation. We didn’t want to give up three-pointers but that didn’t happen.
“On the plus side, we made a nice run on them (in the second half). We played hard. We just need to shoot the ball better overall. We only hit two three-pointers but we need to hit more against a zone defense. We did battle hard and we will get better. This was a good test,” the coach said.
Carter Henry paced Crestwood on offense with 29 points, had nine rebounds, seven assists and two steals. Garret Ollendieck had 11 points, including two three-pointers, five rebounds and three assists.
Andy Osmonson had six points, six rebounds, one block and one steal. Landon Simiele had four points and seven rebounds. Reid Wiley had two points, two rebounds and two assists.