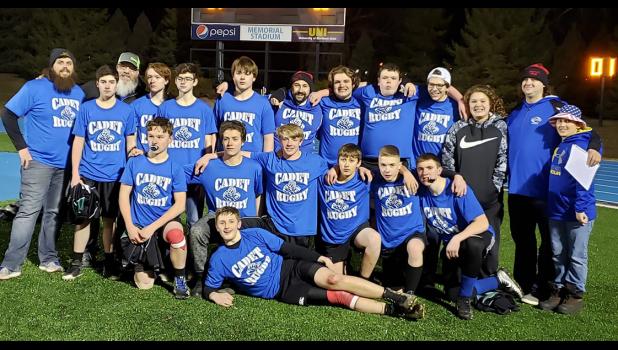 By:
Nate Troy Sports Editor
CRESCO - Local students and fans looking for something new this spring are invited to check out the Crestwood Cadet Rugby Club, which will be competing in its first season this spring.
“This is our first year of playing rugby in Cresco, and it’s only for students,” Crestwood Head Coach Adam Simiele said. “I’ve been playing rugby for several years now, and I’ve wanted us to have a team in Cresco ever since I started playing.
“We were finally able to get things started this year after getting the word out to several kids in town. We decided it was in the best interest to start a team (this year). A lot of parents have also stepped up to help the club,” Simiele said, noting that practices started in late February.
The coach said that teams are allowed to have up to 14 players dressed on a squad. At the present time, Crestwood has 11 players on its roster. The roster includes the following players.
Juniors: Chase Burke, Gavin Puffer, Donavyn Gosch.
Sophomores: Landon Simiele, Sawyer Swatek, Rylin Sorenson,
Freshmen: Brenden Nelson, Nathan Halvorson, Jason Hurd, Noah Ruroden, Dorian Gosch, Braydon Hubka, Colten Miller.
Eighth grade: Tristan Simiele.
Managers include: Catlin Sanders, Caleb Simiele, and Dave Gosch.
“The game of Sevens-Rugby is played by seven players on each team all at once,” Simiele explained. “The games are played with seven-minute halves. Points are scored with five for a try and two for an extra point. To score points, you must cross a goal line, just like football.
“It’s a full-contact sport with no pads. There is a continuous clock, which only stops during halftime. Rugby is a combination of football and soccer,” Simiele said
The coach noted that most of the students on the Crestwood team have not played rugby on a competitive team before, so they are still learning the game.
“We (the coaches) are teaching the kids everything,” Simiele said. “Basically, we are starting from scratch, but the kids are eager to learn. We’ve had four practices so far and things are going great.”
Starting play
On March 29, the Cadet Rugby Squad opened its season with two matches in Waterloo. Crestwood lost to Wolf Creek, 46-0, and the Cadets fell to Waterloo, 22-0.
“On Friday night, the boys learned a lot of valuable lessons,” Simiele said. “They showed some swagger and toughness coming back from a game that didn’t go our way.
“The improvements we made were awesome, and I can’t wait to see how these kids respond. Most of the issues we had are all fixable, and I promise we will sure try,” Simiele said.
Simiele noted that anyCrestwood students interested is welcome to join the squad by contacting him at 563-203-2488 or going to the Crestwood Cadet Rugby Club Facebook page.