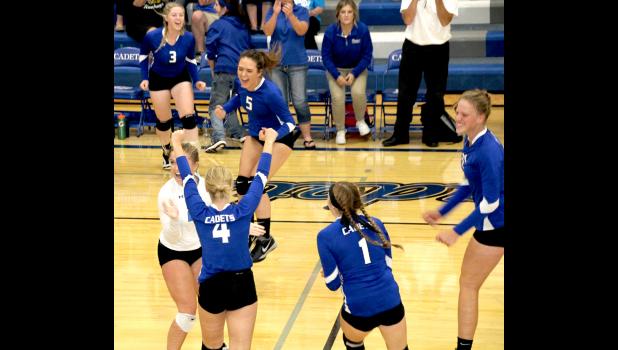 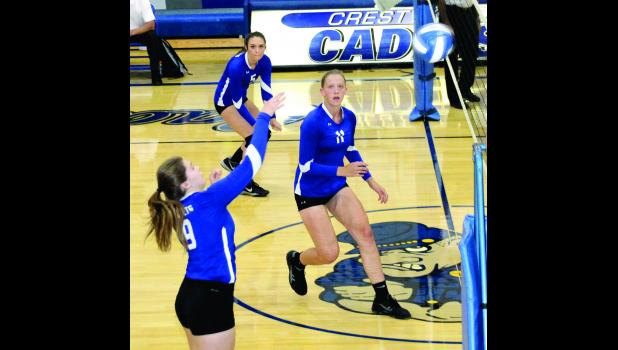 By:
Nate Troy
RESCO -  The Crestwood varsity volleyball team didn’t come out on top on the scoreboard against New Hampton on Sept. 12 at home, but the Cadets proved they can battle hard against any team. New Hampton downed the Cadets, 3-0 (25-18, 25-11, 26-24).
Playing Clear Lake at home Thursday, Sept. 14, Crestwood turned in a solid team performance during a thrilling 3-0 win over the Lions (25-20, 25-16, 28-26) to improve to 5-7 overall.
NH match
Despite losing to New Hampton in three games on Sept. 12, Cadet Coach Robin Gossman praised his team for competing hard against a stout NH squad.
“I thought the girls played with a lot of emotion,” Gossman said. “We continue to get better at that. I was very pleased with the way we played in the third set, especially after what happened in set two. Most teams would have given up but we are starting to understand what needs to happen.
“I am continuing to seek for more aggressive play, and they are starting to understand what that means. I made a lineup change and thought that worked, also. This was the first time that this lineup had been used and we played well,” the coach said.
In game one, Crestwood scored the first point on a kill by Shannon Pisney before New Hampton came back to take a 10-6 lead. Three serves by Emma Mannery and two by Brooklyn Ferrie helped the Cadets cut NH’s lead to 15-12. Two kills by Sharon Goodman sliced the Chickasaws’ lead to 20-15, but NH won, 25-18.
In game two, New Hampton raced to an early 8-2 lead and took control of the game. Crestwood cut the lead to 10-4, but New Hampton finished strong with a 15-7 run to win game two, 25-11.
Game three was a back-and-forth battle throughout. New Hampton led 3-1 early before a kill by Shannon Pisney and four serves by Brooklyn Ferrie gave the Cadets a 6-3 advantage. After the Chickasaws went on top, 7-6, three serves and a kill by Pisney put the Cadets ahead, 10-7.
Crestwood held a 12-9 edge, but New Hampton tied the game at 15-all. The Cadets made a charge with a 9-5 run to grab a 24-20 lead. However, New Hampton came back with a 6-0 run to win, 26-24.
Sharon Goodman tallied five kills and two solo blocks. Brooklyn Ferrie had three digs, completed six of eight serves and had two aces. Kayla Lentz tallied four digs and completed four of five serves.
Emma Mannery had 14 assists, three digs, completed 14 of 14 serves and had one ace. Taylar Pecinovsky had five assists, three digs and connected on five of five serves. Shannon Pisney had 14 kills, six digs, completed nine of 11 serves, had three aces and one block. Kaylee Thomas had five digs.
Clear Lake match
Coach Robin Gossman was proud of the way the Cadets played at the net.
“The team is starting to understand that offense starts with defense and defense starts at the net,” Gossman said. “As I look at the number of blocks we had last night,  it is apparent that our net defense is working.
“As we play defense at the net we control hitting lanes. That makes it easier for the back row. We had more blocks (18) and more digs (63) in last night's match than we did in the previous four matches combined,” the coach said.
Game one saw the Cadets take a 4-2 lead on two kills by Pisney before the Lions came back to take a 9-7 lead. Crestwood came back to tie the game at 13-all taking a 20-15 lead over Clear Lake. The Lions cut the Cadets’ lead to 22-20 before two serves by Emma Mannery and a kill by Pisney clinched the 25-20 win for the Cadets.
In game two, Crestwood took a 3-1 lead before pushing its advantage to 12-7 on two serves by Amiah DeWolf. The Cadets extended their lead to 20-13, but the Lions came back to slice the lead to 22-16. Three straight points by the Cadets gave them a 25-16 win.
Game three was an extremely hard-fought, back-and-forth battle by both teams from the opening serve. Clear Lake led 2-0 before Crestwood went on a 7-1 run to take a 7-3 lead on kills by Memphis Sweeney and Pisney.
After the Lions cut the lead to 9-6, Crestwood went on a 7-2 run to take a 16-9 lead. However, Clear Lake stormed back with a 7-0 run to tie the game at 16-all. Both teams traded points until Clear Lake tied the game at 26-all. Crestwood took control with two straight points to notch a 28-26 victory.
Shannon Pisney led the Cadets with 20 kills, had 10 digs, completed 16 of 16 serves and had two blocks. Emma Mannery completed 17 of 18 serves, had one ace, 17 assists and six digs. Kayla Lentz tallied 26 digs and completed 15 of 17 serves.
Sharon Goodman had six kills and five blocks. Taylar Pecinovsky posted 12 assists and seven digs. Memphis Sweeney and Sam Balk each had five blocks.