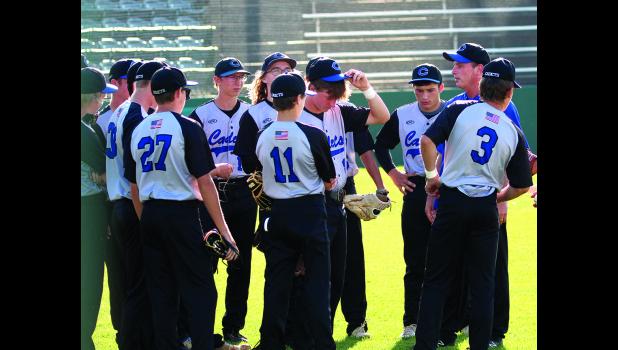 By:
Nate Troy Sports Editor
CRESCO - In baseball, as in most sports, momentum often plays a big role in the outcome of a game. A crucial fielding error or an untimely base on balls can sometimes give an opponent all the momentum they need to surge ahead to victory.
Unfortunately for the Crestwood baseball team, miscues on defense, on the mound and at the plate gave their foes the edge they needed in numerous games this season. Those errors were one reason why the Cadets finished the season at 1-24 overall. Crestwood defeated Waukon, 6-2, on June 7 in Waukon.
Upperclassmen on the team included: Chance Carter, senior; Caleb Kammerer, senior; Ryan Wilson, junior; Topher Bigalk, junior; Cade Korsmo, junior; Landen Bergan, junior; and Ethan Rice, junior.
Sophomores included: Ty Cotant, Dylan Shelton, Jackson Byrnes, Ethin Matt and Robby Ollendieck. Freshmen included: Mitchell Schmauss, Jake Underbakke, Jaxon Millage, Gage Moser, Aidan Skoda and Dashel Donlan.
At the plate, the Cadets were unable to find a consistent, successful rhythm. As a team, they scored only 53 runs in 25 games (2.12 per game). Crestwood posted 111 total hits (4.44 per game), which included six extra base hits.
Among players with more than 10 at-bats, Moser led the team with a .294 batting average. Bergan was first in hits with 16, which included one double and one home run. He also had the second-highest batting average at .286. Bigalk led the team with eight stolen bases.