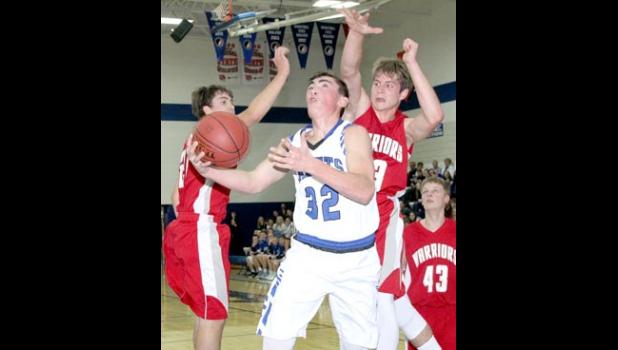 By:
Nate Troy
CRESCO - The Cedar Falls Tigers were a little too strong for the Crestwood varsity boys’ basketball team last Tuesday as the Tigers defeated the Cadets, 59-30, in the season opener in Cedar Falls.
Facing South Winn in the home opener Thursday, the Cadets shook off a slow start to crush the Warriors, 61-28, to notch their first win of the season. Crestwood lost a non-conference game to Caledonia, 68-47, Saturday at home.
C. Falls 59, Cadets 30
A strong effort by the Cadet boys’ squad was not enough last Tuesday as Cedar Falls downed Crestwood, 59-30.
“Cedar Falls is a very athletic team in Class 4A,” Cadet Coach Lynn McCormick said. “They wore us down, but the final score was not indicative of how close the game was. At halftime, Cedar Falls only had a nine-point lead.
“Our guys gave a great effort, but we turned the ball over too many times. For this being our first game of the season, I was happy with our effort overall and we can build on some things. Cedar Falls did a better job with their offensive rebounding, and we didn’t shoot well at times,” the coach said.
Cedar Falls took a 16-13 lead after one period, held a 30-21 halftime lead and went on a 16-3 run in the third period to take a 46-24 lead going into the fourth.
Spencer Cuvelier led Crestwood with eight points, had 10 rebounds and one steal. Clayton Ollendieck had six points, including one three-pointer. Nathan Martinek had five points, including one three-pointer, one steal and one assist.
Colten Wiley had five points and one assist. Kristian Szajna had three points on one three-pointer, tallied six assists and had two steals. Jordan Girolamo had two points, one block and one assist. Alex Kerian had one point, two steals and one assist. Michael Mashek had one block. Jon Henry had one assist.
Score by quarters
Cadets  13   8     3   6  - 30
C.Falls  16  14  16  13 - 59
Cadets 61, S.W. 28
After falling behind the Warriors 9-2 midway through the first period, the Cadets stormed back in the second quarter and cruised to a 61-28 win over South Winn Thursday at home.
Crestwood closed the first period with a 9-2 run to tie the game at 11 after eight minutes of play. In the second quarter, the Cadets went on an 18-5 run to grab a 29-16 lead at halftime. A 20-5 run by Crestwood in the third quarter pushed the lead to 49-21 going into the fourth.
Coach McCormick said the Cadets made some defensive adjustments late in the first quarter to spark the team.
“We switched our defense to a 1-3-1 zone (later in the first), which helped us get some steals,” the coach said. “Our man-to-man defense wasn’t very good early in the game, and we didn’t start the game well.
“Once we changed our defense (to a zone), we forced South Winn to turn the ball over, which led to some easy baskets. Our defense gave us some baskets, which also helped us.
“In the second half, Kristian Szajna hit two big three-pointers. Nathan Martinek and Harry Kitchen really gave us a spark coming off the bench in the first half. Nathan and Harry really stepped up big for us, which was a big key for us.
“That is what basketball is all about - the team. You need to have people coming off the bench to help. Spencer Cuvelier was also a big key to our win, and he’ll help us every night. He is just a man inside (the paint). His ability to rebound and score are big for us, and he had a good game,” the coach said.
Spencer Cuvelier notched a double-double for the Cadets as he poured in 12 points, had 11 rebounds and six steals.  Clayton Ollendieck tallied 11 points and seven rebounds. Harry Kitchen posted nine points. Alex Kerian had nine points on three three-pointers, three rebounds and one block.
Nathan Martinek had eight points, four steals and two assists. Kristian Szajna finished with six points on two threes, had three assists and three steals. Jordan Girolamo had four points and three rebounds. Boston Ferrie added two points. Colten Wiley had two assists and three steals.
Score by quarters
S.W.  11    5    5     7 - 28
CW   11  18   20  12 - 61
Caledonia 68, Cadets 47
After a close first quarter, Caledonia went on a 26-13 run in the second quarter on its way to a 68-47 win over the Cadets Saturday at Crestwood.
Coach McCormick said Caledonia’s defense was the difference in the game.
“Caledonia’s defense forced us into a lot of turnovers,” the coach said. “We knew going into the game we would have to handle the ball well against their traps, and we knew we would need to make some shots. We didn’t make many shots to start the game, and we didn’t handle the ball as well as we should have in the first half.
“We did a much better job in the second half on offense and played Caledonia pretty even (in the third and fourth quarters). But when you start a game without being intense and you let your opponent dictate the game, then you get yourself in trouble,” McCormick said.
The coach did find some positives to take from the game.
“Spencer Cuvelier continues to be a force for us on the inside, but we also need to hit some outside shots. Teams are going to start keying on Spencer, which is why we need our outside shooting to improve. We had a few open shots early in the game, but Caledonia’s intensity with their man-to-man defense took us out of what we wanted to do on offense,” McCormick said.
Clayton Ollendieck led the Cadets with 11 points, including one three-pointer, and had nine rebounds. Spencer Cuvelier had 10 points, 12 rebounds and three assists. Nathan Martinek had nine points, including one three-pointer.
Kristian Szajna and Alex Kerian each scored five points. Szajna also had five assists. Kerian had one three-pointer and eight rebounds.
Colten Wiley, Harry Kitchen and Jon Henry each scored two points. Zackary Lane had one point and three rebounds.