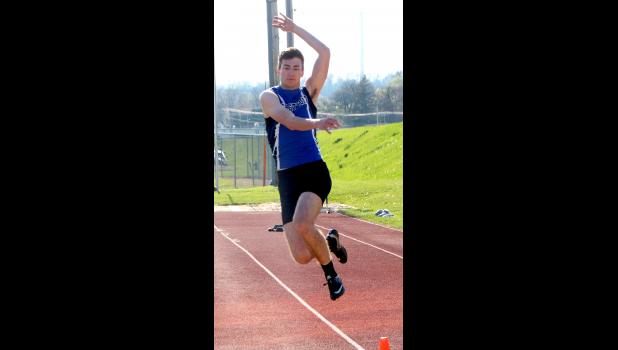 By:
Nate Troy Sports Editor
NEW HAMPTON - Competing at New Hampton on May 3, the Crestwood boys’ track team posted strong results in several events on its way to placing third overall with 81 points.
Dike-New Hartford won the team title with 109 points and Waukon took second with 89 points.
Kade Munkel won gold in the long jump with a personal record of 21 feet, 4 inches and he took second in the high jump (6-0). Carter Henry took first in the 110 meter high hurdles in 16.21. Ethan Mast nabbed first in the 800 meters in 2:08.35. Ayden Easley won gold in the 400 meters in 56.26.
“This was our last regular season meet before the conference meet (on May 6) and it was a smaller meet but a competitive meet for our boys,” Cadet Boys’ Coach Chris Sullivan said. “Kade Munkel jumped a PR (personal record) in the long jump on his last jump and brought home the gold in the long jump. He also had a second place finish in the high jump. He was also part of the 4x100 relay team that got second and the distance medley team that got third. We expect big things from Kade moving forward and he has been our most consistent scorer in multiple events this year.
“The shuttle hurdle team of Carter Henry, Reid Wiley, Travis Brace and Jaydan Teslow took second place right behind Dike-New Hartford in a great overall race. Carter Henry took first place in the 110 meter high hurdles and was also on the 4x100 and sprint medley teams that got second place. He has been really running well all year but has really turned it up of late, which is great to see from one of our senior leaders.
“Travis Brace took third in the 110 meter high hurdles and was part of the shuttle hurdle team that took second. Ethan Mast ran his season best in the 800 meter run and really took it to a second gear with 200 meters left and brought home the gold. Ayden Easley took first place in the 400 meter dash and was part of the spring medley team that placed second," Sullivan said.
Cadets fifth at NEIC
DECORAH - Taking on strong competition at the Northeast Iowa Conference Meet on May 6 in Decorah, the Crestwood boys’ track team gave a solid effort on its way to a fifth place finish with 50 points.
Decorah won the team title with 179 points. Waverly-SR was second at 136 and Charles City took third at 99.
Kade Munkel took second place in the long jump with a Crestwood school record jump of 22 feet, 3 inches and he placed third in the high jump at 6 feet. The previous long jump record was 21 feet, 10.75 inches set by Tyler Clark in 2011.
Carter Henry grabbed second in the 110 meter hurdles in 15.82. Crestwood’s shuttle hurdle team took third place in 1:04.19, which was a school record. The Cadets’ distance medley team finished third in 3:49.62. Crestwood’s sprint medley squad took fourth in 1:40.37 to break a school record.
Sullivan was thrilled to see many Cadets show improvement at the NEIC meet.
“This was a great night to run,” Sullivan said. “The boys did a great job of being mentally prepared and physically prepared for their events. We had a lot of PRs (personal records) and we also broke three school records.
“Kade Munkel broke the long jump mark with a jump of 22-03. The previous record was held by Tyler Clark in 2011 (21-10.75).  We broke the shuttle hurdle record with a time of 1:04.19. The previous record at 1:04.41. The team that broke this record was made up of Carter Henry, Reid Wiley, Travis Brace and Tim Slade. Carter Henry was on the team that broke this record originally set two years ago. It was definitely a goal of his and the team to break it this year," the coach said.