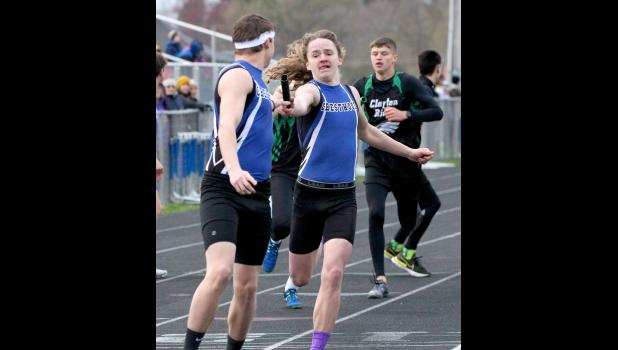 By:
Nate Troy Sports Editor
MONONA - Even though the weather was cold at the MFL-Mar-Mac Co-Ed Track Meet on April 15, the Crestwood boys’ squad was red-hot as it cruised to the team title with 175 points.
Several Cadet individuals and relay teams performed well at Monona. Kade Munkel won gold in the long jump (20-5.25), Peyton Ihns took first in the discus (115-10),  Ethan Mast grabbed gold in the 800 meters (2:12.83) and Topher Bigalk won gold in the high jump (5-4).
Crestwood’s distance medley squad of Dylan Shelton, Tim Slade, Reid Wiley and Ethan Mast captured gold in 4:03.42. The Cadets also placed second in the shuttle hurdle relay and the 4x400 relay.
Cadet Boys’ Coach Chris Sullivan was thrilled to see his squad perform well in many events.
“It was a cold night but the wind wasn’t bad,” Sullivan said. “It turned out to be a decent night for a track meet. We got off to a quick start in the field events with three champions.
“Kade Munkel won the long jump and Maurice Powell took third place (18-6.5) to double up in that event. Peyton Ihns won the discus and Cody Fett took third to double up in that event too. We also doubled up in the shot put with Peyton Ihns taking second and Cody Fett taking fourth place. Topher Bigalk won the high jump as well.
“Peyton had a personal record in both the discus and shot put, which was great to see. Maurice and Topher also had personal records in their events. Anytime you can double up in events, it is huge for the overall team score. In a tight race, the difference was our ability to double up in these three events and take home the team championship," Sullivan said.