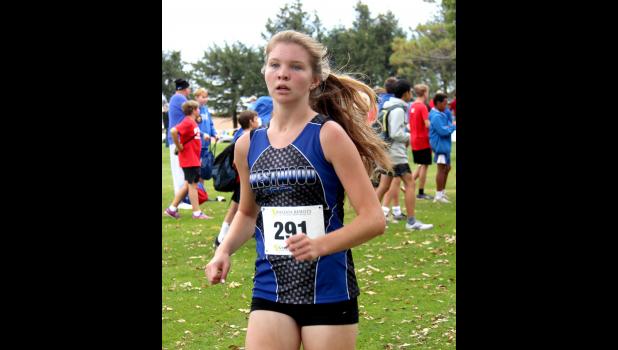 By:
Nate Troy Sports Editor
NEW HAMPTON - Five Crestwood girls finished in the top 20 to help the Cadet Varsity girls’ cross country team nab first place with 60 points at the New Hampton Meet on Thursday, Oct. 6.
Kinze Shea took second place for the Cadets in a personal record time of 19:33.02 seconds. Hillary Trainor of Sumner-Fredericksburg was first in 19:19.19.
In the Varsity boys’ meet, three Cadets finished in the top 10 to help Crestwood place second with 56 points. Dominic Bigalk nabbed third place for the Cadets in a personal record time of 17:32.00. New Hampton won the boys’ team title with 53 points.
The Junior Varsity meets saw the Cadet girls’ team grabbed first place with 26 points and the Crestwood boys’ team was second with 28 points. Tara Koshatka led the Cadet girls’ team by taking third in 23:34.80 and Owen Korsmo led the boys’ team by placing fourth in 20:51.92. Both Koshatka and Korsmo had personal records.
In the Junior High meets, Ava Daley of Crestwood placed third in the girls’ race in 13:25.73. In the boys’ race, Keaton Vobr of Crestwood was 10th in 12:40.01.
Crestwood Head Coach Cassie Lichty gave kudos to all the Cadets for their hard work.
“One thing we’ve worked really hard on the last few years is to get our kids to buy into a champion culture,” Cadet Head Coach Cassie Lichty said. “We want our kids to see their potential and fight for their team even when it’s not easy. This week what I was most proud of was seeing the kids take ownership of their race and their ability to fight together as a team to make a statement before we head into a big part of our season."