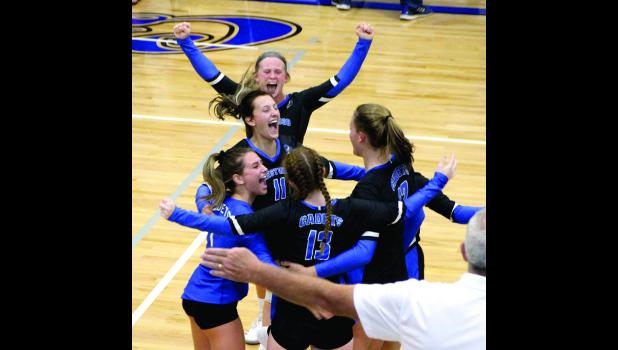 By:
Nate Troy Sports Editor
CRESCO - Taking on Class 3A No. 8 New Hampton on Sept. 17 at home, the Crestwood volleyball team battled hard before falling to the Chickasaws (8-25, 25-23, 16-25, 5-25).
The Cadets bounced back well from the loss to New Hampton with a four-set win over Clear Lake (27-25, 19-25, 25-23, 25-18) on Sept. 19 at home.
Competing at the Waukon Tournament on Sept. 21, the Cadets captured first place overall by posting five wins against only one loss to improve to 11-7 overall. In pool play, Crestwood beat DeSoto (21-4, 21-11), downed Spring Grove (21-18, 21-12) and lost to MFL-Mar-Mac (19-21, 16-21). In the champion bracket, the Cadets bounced Turkey Valley (21-17, 21-10), beat MFL-MM (21-9, 21-10) and downed Waukon in the title match (21-17, 21-9).
NH match
Crestwood Coach Robin Gossman said the Cadets played well at times against New Hampton.
“Looking at the scores of the sets, the first and forth were terrible,” Gossman said. “We did not play well in either of those. The third set was OK, but in the second set, I got to see the team we can be. In the second set, we were able to fight for every point and did not quit. I can not say the same for sets one and four.
“Those sets showed me we still have mental work to do. Looking at only the match, we have to be satisfied with the outcome. We were able to take a set from a top 10 team in our class and conference. This does not mean we can settle in for who we are. We must continue to focus on our mental attitude,” Gossman said.
As a team, Crestwood completed 53 of 56 serves, had one ace, 51 digs, 30 assists, seven blocks and 30 kills.
Sharon Goodman led the Cadets with 21 kills, had three blocks and completed six of six serves. Laken Lienhard was 11 of 11 serving, had 30 assists and six digs. Emma Rissman was nine of 10 serving and had 21 digs.
Memphis Sweeney had five kills and three digs. Trystin Thompson was seven of seven serving and had one ace. Britain Ferrie had two blocks. Keelee Andera tallied nine digs. Kelly Miller and Lexi Hoppe each had two kills.
Clear Lake match
The Cadets and the Lions split the first two sets before Crestwood came out on top in the final two to win the match.
“This was a good win for us,” Gossman said. “Clear Lake has a tall front line, but we were still able to do what we needed to do. We had big offensive nights from Memphis Sweeney and Sharon Goodman. The main reason for their good night is because of the defense.
“Emma Rissman had another good night. Kristen Frazer saw her first meaningful night since putting on a varsity uniform. Kristen had a very good night from the service line to the defensive part of the game. We still need to work on consistency. We have a tendency to slip into sleep-mode on occasion,” Gossman said.
As a team, the Cadets completed 87 of 97 serves (90 percent), had 10 aces, 11 blocks, 65 digs, 45 assists and 46 kills.
Kristen Frazer completed 23 of 26 serves, had five aces and 13 digs for Crestwood. Laken Lienhard was 17 of 18 serving, tallied 45 assists and seven digs. Emma Rissman was 12 of 14 serving and had 19 digs.
Sharon Goodman was 13 of 15 serving, had four aces, four blocks and 23 kills. Trystin Thompson was 10 of 11 serving, had one ace and seven digs. Memphis Sweeney tallied 15 kills and three blocks.
Lexi Hoppe had four kills and two digs. Kaylee Ollendieck posted four digs. Kelly Miller had two kills and two digs. Keelee Andera was eight of eight serving and had six digs. Britain Ferrie had two blocks and two digs.
Waukon Tourney
The Cadets performed well at Waukon on Sept. 21 by notching five wins to capture the team title.
“We lost to MFL in pool play, but we were able to get revenge in the first round of tournament play,” Gossman said. “Throughout the day the girls stayed focused and I thought they had a very good tournament.
“Our defense in the back row was very good helping to create offense for front row. I continue to preach aggressiveness and the girls stayed aggressive throughout the day,” the coach said.