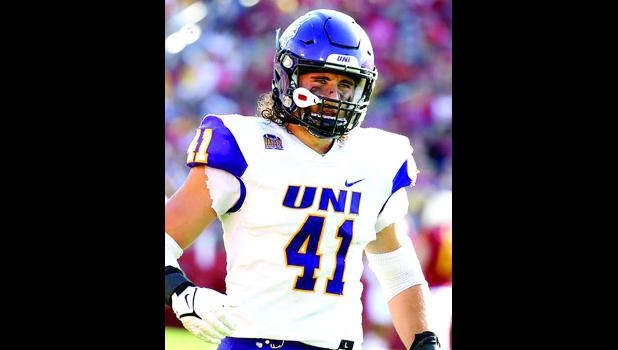 CEDAR FALLS - Spencer Cuvelier, a 2017 Crestwood graduate and current redshirt senior on the University of Northern Iowa football team, is among the first 35 FCS players nominated to the 2022 Buck Buchanan Award preseason watch list.
It was also announced on Aug. 11 that he was named the captain of the UNI football team for the 2022 season.
Spencer is the son of Mark and Renee Cuvelier of Cresco. During his senior year at Crestwood in 2016, he racked up 1,472 yards rushing and scored 19 rushing touchdowns. He averaged 6.4 yards per carry, which led the district that year.
Stats Perform presents the Buck Buchanan Award to the national defensive player of the year in college football’s Division I subdivision.
Cuvelier has also been nominated for the Allstate’s 31st AFCA Good Works Team, one of the most coveted community service awards in college football. He was named to the Stats Perform FCS Preseason All-American Second Team Defense, the Phil Steele FCS Preseason All-American Third Team Defense and the Bluebloods Preseason All-MVFC Team. He also earned MVFC Preseason First Team Defense and Phil Steele MVFC Preseason First Team Defense honors.
His 2021 season was cut short due to injury. He played and started in eight games before he was sidelined. He was named the Stats Perform National Defensive Player of the Week for his performance in the season opener against Sacramento State by forcing six turnovers, recovering two fumbles and notching 15 tackles.