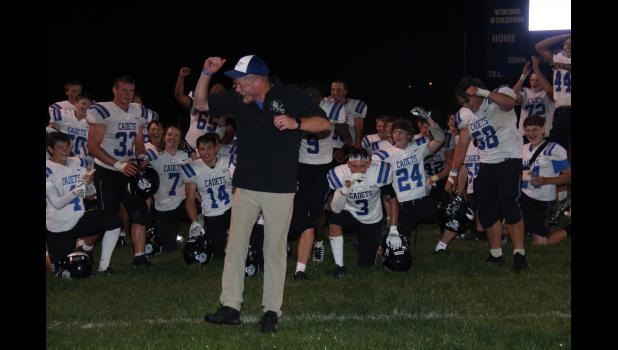 Crestwood gridders rout Decorah, 26-14
By:
Nate Troy Sports Editor
DECORAH - The Crestwood varsity football team raced to a 20-7 halftime lead against Decorah on Friday, Aug. 26, in the season opener and held on for a 26-14 win.
The win allowed the Cadets to snap a 19-game losing streak to the Vikings, which started back in 2003 (no game in 2020). Prior to Friday’s game, the last time the Crestwood varsity squad defeated Decorah was on Sept. 20, 2002.
Shortly after the clock hit all zeros, the Crestwood fans raced onto the field in Decorah to celebrate the long-awaited and well-deserved win over the Vikings.
“Our kids fought insanely hard,” Cadet Head Coach Justin Denner said, with a big smile. “We talk to the kids all the time about following the plan. The last step of that plan is to not flinch. When Decorah had something good happen for them, we stepped up and responded.
“After each time Decorah scored, we came right back and scored. That took care of any momentum the Vikings had, which was huge. I couldn’t be more proud of our guys and our coaches. This (win) is just the start. It’s awesome,” Denner said.
The coach said he and his players were thrilled to end Decorah’s long winning streak.
“We heard (about Decorah’s winning streak) all the time,” Denner said. “Teachers would come up to me and say, ‘I can’t believe it’s been 20 years since we beat them.’ We wanted to get over the hump.
“We were so close to beating them (in previous years). In 2016, 2017, 2020 when I was here we were close (to winning). For our guys to get over that hump, I am so happy for them. They did an awesome job. I am very proud of all of them!” Denner said.
While ecstatic to get the win over Decorah, the coach said that the Cadets can’t afford to relax.
“We’ve got another tough game (on Sept. 2) against Waverly-Shell Rock,” Denner said. “Ultimately, this win over Decorah gives us confidence. We know we have a good team as coaches, but now our players can believe that. Getting this win is a huge confidence-booster for us. Now we need to use this win to keep getting better,” the coach said.
One of the biggest keys to the win was the play of senior quarterback Cole Butikofer, who gained 169 yards rushing, scored four touchdowns and completed three of six passes for 38 yards.
“With our rushing game, whoever had the hot hand (was going to carry the ball),” Denner said. “Maurice Powell and Cole both ran the ball well. Our offensive line did a great job of road-grating people, which allowed Cole to break a lot of big runs.”
Butikofer gave kudos to his teammates for the win.
“It’s been a long time since we’ve beaten (Decorah) but we got the job done,” Butikofer said. “Our hogs (offensive linemen) did a great job up front. We kept pushing and fighting. Our defense also played solid and didn’t allow many big plays.”
Denner was also pleased with the defensive effort.
“Defensively, we gave up a couple big plays. We bent a little but we didn’t break. For the most part, our guys did a great job,” Denner said.
Good start
Decorah received the opening kickoff but the Cadets forced them into a three-and-out. Crestwood started its first possession and quickly went to work. The Cadets marched the ball down the field on the ground as Butikofer capped the drive with a two-yard run with 1:59 left in the first quarter to give Crestwood a 6-0 lead. The point after kick by Topher Bigalk was no good.
Early in the second quarter, Brock Voyna intercepted a Decorah pass at the Cadets’ 38 yard line. Butikofer completed a 29-yard pass to Topher Bigalk to move the ball to the Vikings’ 33 yard line. Seven plays later, Butikofer scored on another two-yard plunge with 6:11 left. Bigalk ran the ball in for two points to give the Cadets a 14-0 lead.
Decorah responded quickly. Quarterback Brady Stille raced 59 yards to paydirt with 5:20 left in the second. Erik Hjelle kicked the extra point to cut Crestwood’s lead to 14-7.
After both teams traded punts, the Cadets got the ball back with three minutes left before halftime. On fourth-and-one from their own 35, Butikofer found some room and raced down the sidelines to the Vikings’ 10-yard line with 34 second left. Three plays later, Butikofer scored on a two-yard run with 16 seconds left to push the lead to 20-7. The extra point kick by Bigalk was no good.
Crestwood got the ball to start the third quarter. Unfortunately, three plays later, Decorah intercepted a Cadet pass and returned it to Crestwood’s eight-yard line with 10:17 left. Following a Decorah penalty and a sack by the Cadets, the Vikings were pushed back to the 11. On fourth down, Stille completed an 11-yard touchdown pass to Kaiden Quandahl with 8:17 left. Hjelle kicked the extra point to cut the lead to 20-14.
The Cadets came right back with an 80-yard, 14-play drive which was capped by a five-yard touchdown run by Butikofer at the 1:37 mark of the third quarter to push the lead to 26-14. The two-point conversion pass failed.
With 3:17 left in the fourth quarter, Decorah got the ball at their own nine-yard line.  Hjelle completed a long pass to move the ball to the Cadets’ 22-yard line with 33 seconds left. However, one short pass and three incomplete passes allowed Crestwood to take over at its own 14 with seven seconds left. The Cadets ran out the clock and celebrated the long-overdue victory.