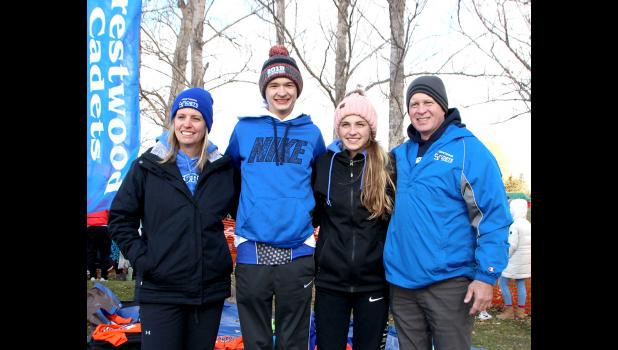 By:
Nate Troy Sports Editor
FORT DODGE - Battling the cold, wind and dozens of the top cross country runners in Iowa on Saturday, Nov. 2 at the Class 2A State Meet, Crestwood senior Bryden Juelsgaard and freshman Olivia Ollendick both ran well.
Juelsgaard, who was making his third straight trip to State, finished 56th overall in a time of 17 minutes, 42.7 seconds. Ollendick, making her first trip to State, placed 46th overall in 20:57.6.
In the Class 2A Girls’ Team standings, Mid-Prairie took first overall with 61 points. Williamsburg was second with 62 and Monticello took third with 130.
In the Class 2A Boys’ Team standings, Tipton was first with 78. Des Moines Christian took second with 82 and Monticello was third with 106 points.
Cadet Head Coach Jim Obermann was pleased with the way both Juelsgaard and Ollendick competed against the cream of the crop at the State Meet.
“Olivia had a good run on a challenging course,” Obermann said. “Her time (20:57.6) was her second best time this season. She approached the meet the correct way and ran a solid race. The success she had this year in cross country should propel her to have success in other sports she competes in later on during the school year. Olivia was pleased with the way she competed.”
The coach also gave kudos to Juelsgaard for his effort. Obermann noted that Juelsgaard is the first three-time State Qualifier on the boys’ team that he has coached since he started teaching at Crestwood in 1988.
“Bryden ran a decent and solid race,” Obermann said. “This season was a tremendous year for Bryden. Even though his finishing time (17:42.7) was not his best time of the year, it was not a bad time. He has been a pleasure for me to coach and I’m glad to see him have success this season.
“I also want to thank all of the fans, family members and friends who came down to Fort Dodge and other meets to support the Cadet runners. Their support means a lot to us as a team,” Obermann said.