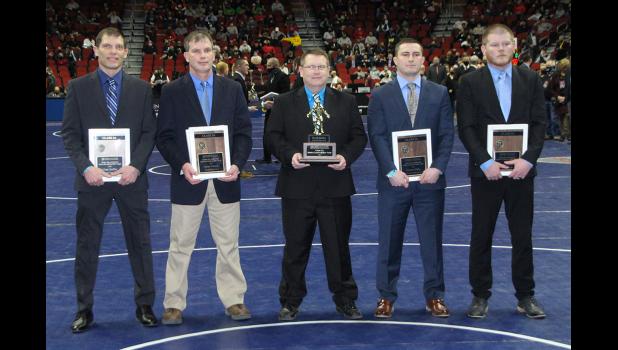 Keith Slifka named Class 2A Wrestling Coach of the Year

By:
Nate Troy Sports Editor
CRESCO - When it comes to hard work, dedication and giving it his all 100 percent of the time, there are few coaches who can surpass Crestwood Head Wrestling Coach Keith Slifka.
If people in other parts of Iowa didn’t know that before the 2021 State Tournament, they sure as heck know it now.
Prior to the state championships on Feb. 20 at Wells Fargo Arena in Des Moines, Slifka was named the Class 2A Coach of the Year by the Iowa Wrestling Coaches and Officials Association.
Before the state tournament started, Slifka was also named the Northeast Iowa Coach of the Year, which qualified him as a candidate for Class 2A Coach of the Year. Coaches and officials voted in the district to select Slifka for the award. This year marked the first time since the IWCOA started presenting the award in 1970 that a Crestwood coach has earned this honor.
The Cadet assistant coaches were also honored with plaques before the state finals. They included: Justin Denner, Jerry Steffen, Gary Steffen and Hunter Slifka.
Keith Slifka, who has served as the Crestwood Head Coach since 2005 and began his coaching career in 1993, has amassed an impressive dual meet record of 312-158.
He has led the Cadets to the State Duals twice (qualifier in 2019 and second place in 2021), won three district and sectional titles (2014, 2020, 2021), coached 58 state qualifiers, 38 state place finishers and guided four individuals to a total of six state titles including: Kyle Slifka (2006), Michael Millage (2015), Ryan Steffen (2018) and Carter Fousek (2019, 2020, 2021).
During the 2020-21 season, his squad posted a 17-2 dual mark with the only two losses coming to Class 3A No. 1 Waverly-Shell Rock and Class 2A No. 1 West Delaware. It’s an understatement to say Slifka’s selection for the Coach of Year Award was well-deserved.
“It’s very humbling for me to receive the Coach of the Year Award,” Slifka said. “The fact that other coaches and officials in Iowa nominated me for the award means a lot to me. In 30 years of coaching wrestling, I’ve begged, borrowed and stole from other coaches in terms of techniques, knowledge and tricks of the trade. I’m the coach I am today because of the information I’ve learned from other coaches and officials.
“After winning this award, I’ve done a lot of reflecting and looking back. Our team was fortunate to have a great season. I know that Cresco has had many legendary coaches and teams before I came here. A lot of factors went into our success this year, including all our athletes and coaches.
“I have been extremely fortunate to be in the situation I’m in right now by coaching at Crestwood. Here in Cresco, we’ve got great athletes, solid wrestling coaches, a strong youth program and junior high program and a great school administration that supports us. If any one of those factors didn’t work well, I wouldn’t be where I am right now," Slifka said.