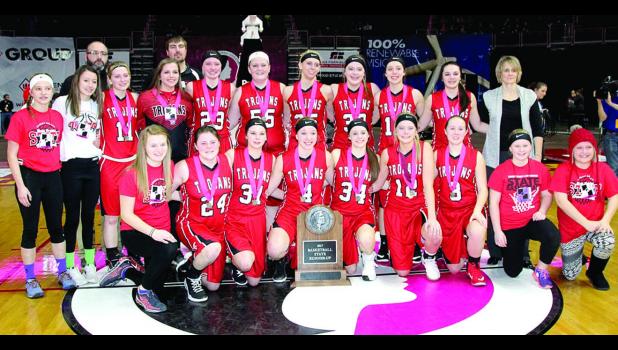 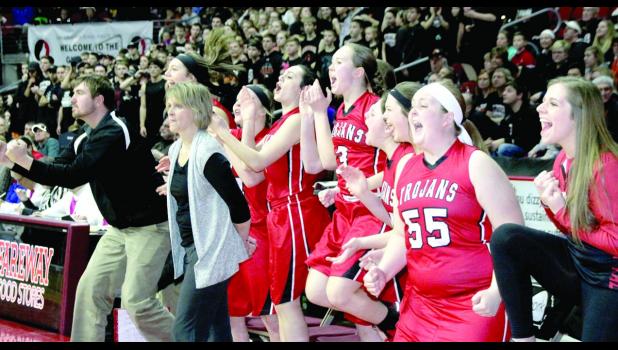 By:
Nate Troy
DES MOINES - A determined fourth quarter rally by the No. 2 Turkey Valley girls’ basketball team (23-3) fell a few points short as No. 1 Springville (25-2) held on to defeat the Trojans, 45-36, Friday in the Class 1A State Championship game at Wells Fargo Arena.
Friday’s loss to the Orioles was the second straight year the Trojans fell to Springville in the title game. In 2016, Turkey Valley lost to Springville, 49-48. For the second year, TV senior Shelby Reicks was named to the State All-Tournament Team.
The championship game was a hard-fought defensive struggle for four quarters. The Springville Orioles grabbed a 6-0 lead with 2:57 left in the first before a layup and free throw by TV senior Shelby Reicks cut the lead to 6-3 after one period.
In the second quarter, the Orioles pushed their lead to 11-5 before a 4-0 run by the Trojans cut Springville’s edge to 11-9. A 6-2 run by the Orioles to close the half gave them a 17-11 lead at halftime.
Springville went on a 14-6 run in the third to extend its lead to 14 points (31-17) going into the fourth.
Down but not out, the Trojans refused to quit. Turkey Valley reeled off a 14-4 run, including three three-pointers by senior Sadie Nymeyer, to slice the Orioles’ lead to 35-31 with 1:56 left. Unfortunately for the Trojans, Springville bounced back with a 10-5 run over the final 1:30 to secure the win and the title.
TV Co-Coach Carla Nymeyer said it was tough for the Trojans to get their offense clicking against the Orioles.
“Springville has a very tough and very intimidating defense,” Co-Coach Carla Nymeyer said. “Our girls kind of felt that way when they came out to start the game. We tried to reassure the girls they just needed to attack and go at the basket. We were able to do that in the second half, but we just came up short.
“We were allowing Springville to set up their defense, and we were allowing them to get a couple people on us. They had their hands up right in our faces, which happened too many times in the first half,” Nymeyer said.
The Trojans connected on only four of 16 field goals in the first half (25 percent), but they improved in the second half by hitting nine of 25 shot attempts (36 percent).
“In the second half, we did a better job of getting the ball up the court quicker,” Nymeyer said. “We didn’t allow Springville to get set on offense and we had better movement. When we did that, they weren’t as intimidating.
“Springville didn’t do anything (on defense or offense) that surprised us. They have a solid defense, and they didn’t do anything we didn’t expect. We just didn’t execute the way we wanted to,” Nymeyer said.
Despite falling behind by 14 at the end of the third, the coach was happy to see the Trojans battle until the final buzzer.
“We are proud of our girls that they stayed with (the game plan),” Nymeyer said. “The rally in the fourth was just a little bit too late. I wish we could have rallied earlier.”
Nymeyer praised the six Trojan seniors including: Sloan Huinker, Kayla Gebel, Shelby Reicks, Sadie Nymeyer, Morgen Kuennen and Abbey Ott.
“Our senior class has meant a lot,” the coach said. “They have defined Turkey Valley basketball. For me, it’s been emotional because I’ve been involved with the seniors since they’ve been in third grade. I’m happy with what the girls have accomplished and how hard they’ve worked. They are also very nice girls off the court, too. I’m very proud of how they’ve grown up.”
Co-Coach Nymeyer also gave extra kudos to her daughter, Sadie Nymeyer.
“It’s been a real pleasure to coach Sadie,” the coach said. “Her effort has been outstanding. It’s been nice to be right beside her the whole way (during her basketball career). I’ve really enjoyed it very much,” Coach Nymeyer said.
While obviously disappointed with the loss, senior Shelby Reicks tipped her cap to the Orioles.
“Springville is a pretty great team,” Reicks said. “They really liked to create some chaos for us and made  us uncomfortable (on offense). We just came up short. Springville has been playing this way for the past two years in every game we’ve played them.
“Playing basketball at Turkey Valley has been amazing. I have had amazing teammates and coaches. The sport has been incredible for me. It’s great to have such a great support system. When you look into the crowd and see all the people cheering for you, you know that they’ve got your back,” Reicks said.
Sadie Nymeyer also praised her team after the game.
“During the last eight minutes, we wanted to play ball until the buzzer and give it our all,” Nymeyer said. “And we did. In the fourth quarter, we didn’t for one minute think that we’re done. We kept saying, ‘We can do this and come back.’ It just didn’t happen this time.
“It has been a blast playing for my mom (the past four years). It’s been something we could share. Not many people have that opportunity of having your mom as a coach. It has been great playing the sport I love with my mom and my best friends. It’s been an amazing ride, and I’ve loved every minute of it,” Nymeyer said.
TV statistics
Sadie Nymeyer tallied 13 points, including three three-pointers, and had three rebounds. Shelby Reicks had 13 points, including two threes, five rebounds, six steals, two assists and one block.
Morgen Kuennen posted five points, six rebounds, three blocks and two steals. Elli Winter had four points, five rebounds and two steals. Kayla Gebel had one point and two assists. Kassidy Reicks had one assist.
Springville stats
Mikayla Nachazel had 15 points and 14 rebounds. Rylee Menster tallied 15 points and four assists. Alyssa Jaeger had five points and seven rebounds. Nichole Kane and Madi Wagaman each scored four points. Sami Johnson had two points.
Score by quarters
TV   3    8     6   19 - 36
Spr   6   11   14  14 - 45