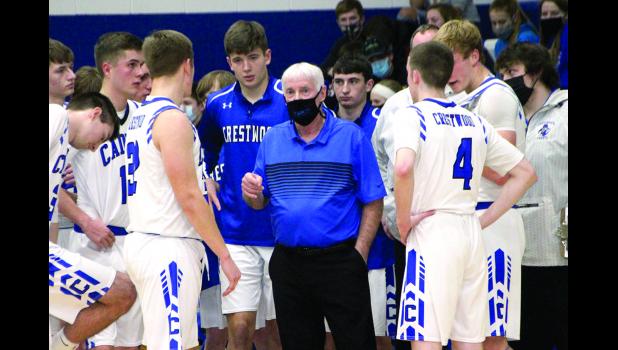 By:
Nate Troy Sports Editor
CRESCO - After more than 40 years of coaching basketball, including the past 19 as varsity boys’ head coach at Crestwood, Lynn McCormick is stepping down as the head coach. During a recent school board meeting, he announced his coaching resignation.
McCormick noted that the decision to retire from coaching basketball is one he had thought about for some time.
“When you get to my age, you think about retiring,” McCormick noted. “Over the past few years, I thought, ‘Is it better for the kids to have a coach who is younger?’ Then with the pandemic going on during this past season, it got to the point where I thought it might be good for the kids to have a younger coach. In my heart, I just knew it was time (to retire) and have someone else take over.”
Although McCormick’s coaching travels wrapped up in Crestwood, his coaching journey started in the late 1970s, hundreds of miles from northeast Iowa. After graduating from Crestwood in 1970, McCormick played basketball at Northland College in Ashland, Wis., for four years. Following graduation, he worked at Northland as an admissions counselor and in the financial aid office from 1974 to 1977. He was an assistant coach for the Northland Lumberjacks during the 1977-78 and 1979-80 seasons. In between, he coached at the University of Minnesota-Duluth during the 1978-79 season.
McCormick joined the high school coaching ranks at Sibley-Ocheyedan during the 1980-81 season. He guided the Generals for 13 seasons from 1980 to 1993 before taking the reigns at Cherokee from 1993 to 1999. He coached at North Fayette from 1999-2001 before coming to Crestwood.
He served as the Crestwood sophomore boys’ basketball coach during the 2001-02 season, which saw the Cadets post an 18-0 mark. He took over as varsity coach three  games into the 2002-03 season when former coach Oakleigh Natvig stepped aside. From 1980 to 2021, McCormick has compiled a record of 399-390.
While McCormick said he enjoyed all of his coaching stints, he noted that he was excited to come back to Crestwood in the fall of 2001.
“I was hoping to get back to Cresco (in 2001),” McCormick said. “Luckily for me, a teaching job opened up at Crestwood that fall so I took it.”
McCormick noted that his basketball playing days started in junior high in 1964 at Ridgeway before he played four years at Crestwood High School from 1966-70.
“I have always enjoyed the competition in basketball. My mom, Lila, played basketball in Ridgeway and she always loved the sport, which is probably where I got my love of the game. I’ve always loved competing in basketball, whether it was playing or coaching.
“Before my mom passed away in 2008, she and my dad, Gene, got the chance to go to State three times to watch us play (when Crestwood advanced to State in 2004-2006). That was the thrill of their lives,” the coach said.
While the Cadet boys’ squad had experienced a few good seasons prior to McCormick’s arrival as head coach, it’s not a stretch to say that he built a strong, competitive and consistently successful boys’ basketball program at Crestwood.
The Cadets won four NEIC titles during his tenure (2004, 2005, 2009 and 2019). During McCormick’s first full-season as head coach (2003-04), the Cadets posted a stellar record of 24-3, advanced to the state tourney for the first time and made it to the championship game before losing to Harlan.
The following year, 2004-05, the Cadets got back to state and advanced to the finals before losing to MOC-Floyd Valley to finish at 25-2. Crestwood made its third trip to state during the 2005-06 season and lost in the first round.