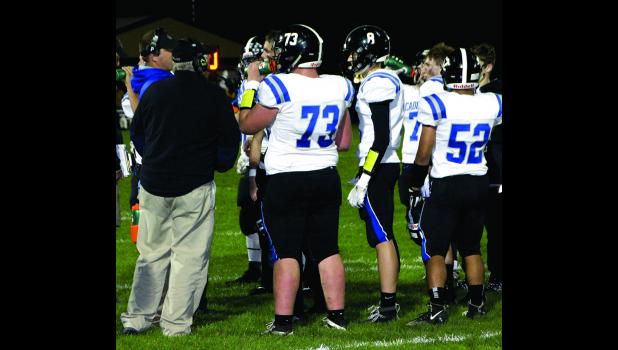 Miscues hurt Crestwood during loss to No. 2 Clear Lake

By:
Nate Troy Sports Editor
CLEAR LAKE - Class 2A No. 2 Clear Lake took advantage of a handful of big pass plays, four Crestwood turnovers and several Cadet penalties to defeat Crestwood, 35-0, on Oct. 4 in Clear Lake.
The loss dropped Crestwood’s overall record to 3-3 and 1-1 in District 2. Clear Lake improved to 6-0 overall and 2-0 in district play. The Cadets will host New Hampton on Oct. 11 at 7:30 p.m.
Although Friday’s contest might appear lopsided based on the final score, it was close through the first two-plus quarters.
Clear Lake turned the ball over on downs after advancing the ball to the Cadets’ 37 on its first possession. Both teams then exchanged punts before the Cadets started their second possession at their own 35.
A holding call on Crestwood pushed the ball back to the 47-yard line before Clear Lake’s Connor O’Tool picked off a pass, which bounced off a helmet, and returned it 53 yards for a touchdown with 3:10 left in the first period. Hunter Nielson kicked the extra point to make the score 7-0.
Early in the second quarter, the Cadets moved the ball to the Lions’ 27 before Clear Lake’s Tyres Green intercepted a pass in the end zone and returned it to the Crestwood 14.
Late in the second quarter, Clear Lake capped a 53-yard drive when Jaden O’Brien-Green reached paydirt on a 10-yard run with only 1:47 left. Nielson kicked the extra point to give the Lions a 14-0 halftime lead.
Crestwood fielded the second half kickoff at its own 22 and had good success moving the ball. The Cadets used 14 running plays, two pass plays and one pass interference to move the ball to the Lions’ five-yard line before turning the ball over on downs with 5:07 left in the third.
On the next play, Clear Lake recovered its own fumble at the one-yard line. One play later, Lions’ quarterback Jaylen DeVries connected on a pass over the middle to Nick Danielson, who broke one tackle and raced 99 yards for a touchdown with 4:13 left to push the lead to 20-0. The point after kick failed.
Two plays later, Clear Lake recovered a Cadet fumble at the Crestwood 47. Two runs and two passes moved the ball to the Cadets’ 20. One play later, DeVries connected on a 20-yard touchdown pass to Kody Kearns with 1:59 left in the third. DeVries ran the ball in for two points to extend the lead to 28-0.
Early in the fourth quarter, the Lions added one more score on a 69-yard touchdown pass from DeVries to Kearns.
“We didn’t make plays and they did,” Cadet Head Coach Skip Eckhardt said. “We had a few dropped balls, we had some penalties and we gave Clear Lake some big plays.
“If we could have scored to start the second half, we could have gotten back in the game. It’s not like Clear Lake physically dominated us in the game. They just made the plays. We need to get things straight and get ready for New Hampton (on Oct. 11),” Eckhardt said.
Crestwood finished the contest with 225 total yards, including 161 yards rushing. Clear Lake tallied 337 yards, including 245 yards through the air.
Reece Wilson led the Cadets with 118 yards rushing on 30 attempts and he caught four passes for 42 yards. Garret Ollendieck tallied 53 yards on 13 carries.