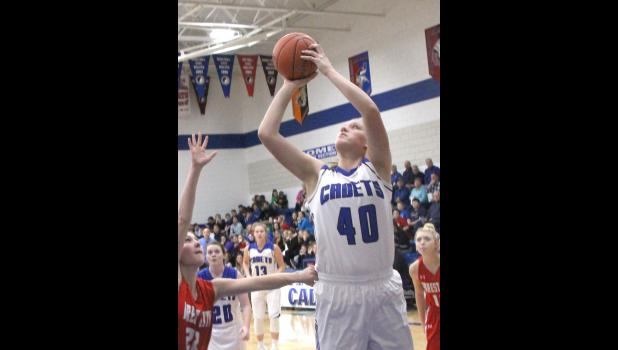 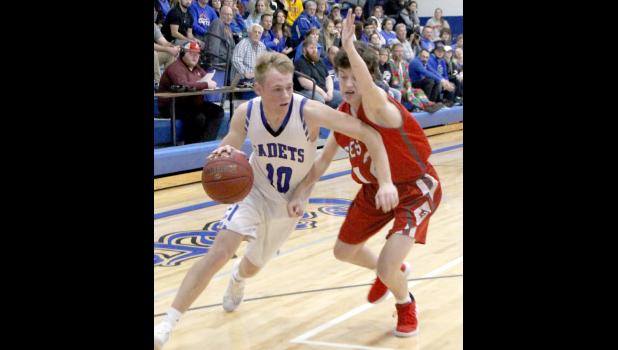 By:
Nate Troy Sports Editor
CRESCO - Crestwood junior Sharon Goodman tallied a school-record 42 points to help lead the No. 13 Cadet girls’ team to an impressive 62-49 win over Forest City on Dec. 20 during Senior Night.
In the boys’ contest, Forest City broke open a close game with a 21-10 third period run on its way to a 45-34 win over the Cadets on Dec. 20.
Girls: Cadets 62, F. C. 49
Following a close first half, the Cadet girls’ basketball team went on a 19-12 third period run on its way to a convincing 62-49 win over Forest City to improve its overall record to 6-3.
The Indians were simply unable to contain Crestwood junior Sharon Goodman, who knocked down 19 of 23 field goal attempts and four of five free throws on her way to 42 total points.
Crestwood Girls’ Head Coach Dale Dennler was pleased to see Goodman dominate in the post, but he noted that the girls did a good job of passing the ball.
“I was pleased to see the girls run the offense well and hit some outside shots, which was important,” Dennler said. “Forest City was trying to run a half-court trap against us, but we were able to break it and find Sharon inside (near the basket). We finished with 23 assists, which was nice to see. The girls did a good job of handling the ball well and hitting their shots.
“We need to continue to be strong with the ball. The girls made some good decisions, but they can also make better decisions, too,” Dennler said.
The coach noted that the win was a group effort.
“It takes all five girls on the floor (to be successful),” Dennler said. “The girls did a good job of getting the ball to Sharon in the post, and she did a good job of finishing near the basket.
“In the third quarter, our defense got some stops, which made a difference in the game,” Dennler said.
Goodman finished with 42 points, 14 rebounds and four blocks. Shelby Pisney had six points, including two three-pointers, and three assists.
Brooklyn Ferrie had six points, five assists and three rebounds. Laken Lienhard tallied five points, including one three-pointer, six rebounds and nine assists. Annie Mast had three points on one three-pointer, had five rebounds and two assists. Taylor Shelton had three assists.
Score by quarters
FC    14   10   12   13. - 49
CW.  13   13   19   17  - 62
Boys: F.C. 45, Cadets 34
Forest City took advantage of a 21-10 third period run to grab a 38-27 lead heading into the fourth en route to a 45-34 win over the Cadet boys’ team. The loss dropped Crestwood’s record to 4-1.
The score was tied at seven-all after one period and 17-all at halftime before the Indians built a double-digit lead going into the fourth.
Crestwood Boys’ Head Coach Lynn McCormick said subpar shooting hurt the Cadets against Forest City.
“We just didn’t put the ball in the basket,” McCormick said. “We missed a lot of easy scoring opportunities and we missed a lot of free throws, too.
“Defensively, we held Forest City to only 45 points, which was great, but we need to score more than 34 points. This was a very poor shooting effort on our part.
“We also had some turnovers in the third quarter, which allowed Forest City to take the lead,” McCormick said.
Zack Lane led the Cadets with 10 points. Jacob Andera tallied seven points, including one three-pointer. Carter Henry had six points. Boston Ferrie and Jon Henry each scored four points. Nathan Martinek posted three points on one three-pointer.
Score by quarters
FC    7   10   21   7 - 45
CW   7   10   10   7 - 34