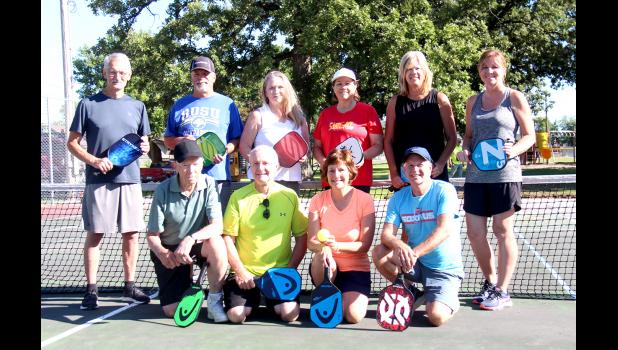 By:
Nate Troy Sports Editor
CRESCO - What sport has been around since 1965 but has grown in popularity by leaps and bounds over the past three years? It’s pickleball, of course!
Even if you may not be familiar with this specific sport, chances are good that you have at least heard of tennis, ping pong or badminton. Pickleball is an indoor/outdoor sport which combines the elements of these three sports.
The game is played on a court the size of a badminton court with a low net. Players use a paddle the size of an oversized ping pong paddle to hit a whiffle ball. Games can be played with either four players (doubles) or two (singles). The first team/player to reach 11 points wins but it is required to win by at least two points.
According to the website selkirk.com, there were 4.8 million pickleball players in 2021, which was up by 14.8 percent from 2020. In 2022, the sport has two pro tours, Pro Pickleball Association (PPA) and the Association of Pickleball Professionals (APP) and has paid out more than $5 million in prize money.
In Cresco, the sport is continuing to grow every year with more people picking up their paddles and hitting the court. As of August 2022, two Cresco pickleball groups  totalling more than 30 people have been playing in the morning and afternoon at Evans Park and at the Fitness Center. The courts at Evans Park are currently being renovated to include four  official pickleball courts and one tennis court.
The morning group includes: Jerry Wilson, Rick Hagen, Sandy Hagen, Jim Obermann, Bob Gast, Larry Shroyer, Sandy Shroyer, Sue Murphy, Vicki Sovereign, Paula Galvin, John Heisler, Marge Sovereign, Reuben Hershberger, Marv Praska, June Moudry, Cheryl Mracek, Lynn Murray, Darla Erickson, Corey Gesell, Danielle Baldwin and Tony Sturm.
The evening squad features: Kelly Buehler, Bren Steffens Johnson, Shirley Henry Weber, Gayle Kelm, Whitney Erickson, Doug Berg, Mark Johnson, Gary Kelm, Bob Berry, Gerald Hageman, John Moen, Jerry Johnson, Herbie Peter, Tyler Mikesh, Mariana Mikesh, Amy Murphy, Mike Woldrick, Jessie Lienhard and Laken Lienhard.
Hageman, who has been playing pickleball for the past three years, said he truly enjoys the sport.
“It’s a good workout without being too crazy,” Hageman noted. “It depends on how hard you want to play. I play it about three or four times per week. I’ve also played in tournaments in Mason City and Albert Lea, Minn., and other places. I’ve played in both singles and doubles in pickleball tournaments.”
Hageman said that one misconception people have is that pickleball is mainly for older people.
“Some people get scared off because they think it’s just for old people,” Hageman said. “People of any age can enjoy pickleball. It’s a great family and group activity."