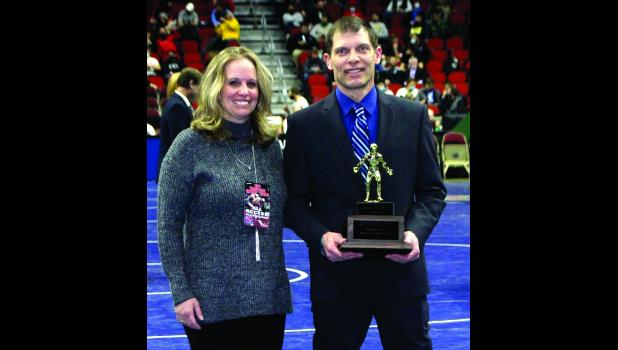 By:
Nate Troy Sports Editor
CRESCO - Crestwood Junior High Wrestling Coach and Math Teacher, Jerry Steffen, recently received the Class 2A Junior High Wrestling Coach of the Year Award. Steffen was presented this award prior to the state wrestling finals on Feb. 20 in Des Moines.
This season marked Steffen’s 24th year of coaching wrestling. For the past 21 years, he has guided the Cadet Junior High Wrestling Program, which has included serving as a volunteer coach for the high school team for the past seven years and a volunteer coach for youth wrestling for several years. Prior to coming to Crestwood in 2000, he was an assistant varsity coach at Spirit Lake for three years.
Steffen noted that he has been fortunate to work with so many helpful and knowledgeable people since moving his family here in the fall of 2000.
“Over the past 21 years, I’ve had the opportunity to coach with Todd Knobloch, Gary Steffen, Keith Anderlik and Hunter Slifka,” Steffen said. “During the last seven years, I have also helped as a volunteer at the high school and had the opportunity to coach with Keith Slifka, Justin Denner, Gary Steffen, Hunter Slifka, Larry Trende and Gary Bergmann.
“When you are around all of those people, you can’t help but learn different ways to reach kids in the sport of wrestling. You also help kids become productive student-athletes. I’ve also had the opportunity to learn from Jim Sovereign, Lee Sill, Doug Hatch, Tom Schmauss, Todd Schmauss, Al Reicks, Mike Adams, Tannor Burke, Ryan Kittelson, coaches from other surrounding high schools and colleges and many dedicated and knowledgeable wrestling dads. I have picked up many techniques, tricks and ideas from all of these people over the past 21 years. My son, Ryan also contributed as we would analyze and break down his training and matches.  I would use this knowledge to help other wrestlers.  All of these people have helped me become the coach I am today and I will be forever grateful,” Steffen said.
Regarding the Class 2A Coach of the Year Award, he was excited to learn he was chosen for the award. However, he was also thrilled to learn Head Coach Keith Slifka nominated him for the award. After being nominated, the Iowa Wrestling Coaches and Officials Association selected Steffen to receive the award.
“It was an honor just to be nominated because that showed people noticed what I’m doing as a coach,” Steffen said. “I was very thankful to learn that I was chosen to receive this award for wrestling. It has been great to be a part of a program in Cresco that has a lot of wrestling history, tradition, dedicated coaches, devoted parents and committed wrestlers. It truly does take a village to build a successful program and we have that here in Cresco.
“We have devoted parents who take their kids to our Cresco Youth Club practices, travel to surrounding tournaments, attend camps and other practices as well as support their school practices and events. We have an excellent youth program in Cresco which assists the junior high program. Over the years, there has also been a huge increase in club wrestling participation with our local wrestlers, which really helps increase the talent coming into our junior high,” Steffen said.