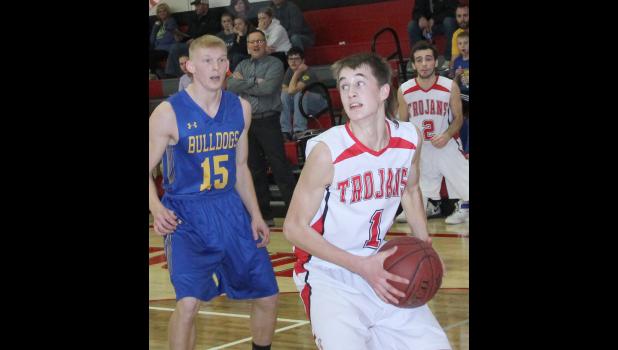 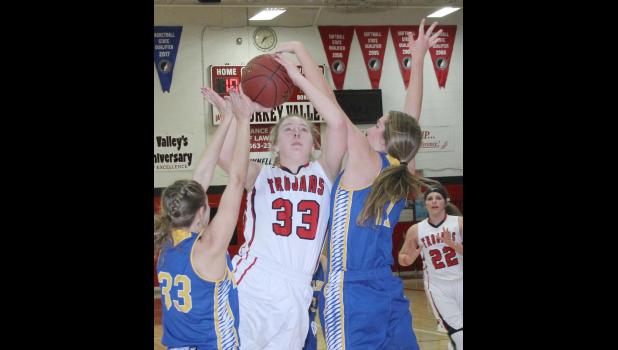 By:
Nate Troy
WEST UNION - A strong second half lifted the Turkey Valley girls’ basketball team to a 53-43 win over North Fayette Valley on Jan. 4. In the boys’ game, TV grabbed a 37-20 halftime lead and cruised to a 62-50 win.
Girls: TV 53, NFV 43
After taking a 16-12 halftime lead, the TV girls’ team went on an 18-8 third quarter run on its way to a 53-43 win over North Fayette Valley on Jan. 4. The win improved TV’s record to 7-6.
“We found a way to score enough in the 4th to win,” TV Co-Coach Dan Stepan said. “It is a great way to start the second half of the season.”
Elli Winter led the Trojans with 18 points. Breanna Busta had 12 points, and Katlyn Baumler had eight points.
Jaycie Bryne tallied six points. Emily Busta had five points, and Kassidy Reicks had four points.
Score by quarters
TV    7  9  18  19  - 53
NFV 3  9   8   23  - 43
Boys: TV 62, NFV 50
Turkey Valley went on a 24-8 second quarter run to take a 17-point halftime and held off NFV to earn a 62-50 win. The win improved the Trojans’ record to 9-2.
“North Fayette Valley got off to a quick start, but we answered and for the rest of the first quarter both teams went back-and-forth,” TV Coach Chris Sullivan said. “In the second quarter, our defensive intensity and instinct was excellent and we created numerous turnovers and it sparked our offense.
“In the second half, we remained in control of the game and the kids did a good job of staying posed when NFV cut the lead to ten and finished it out with some free throws. This was our first game after break and I thought we had great practices over break.
“We got a lot better but we needed to get into live competition. I thought we had moments of greatness tonight and then moments where we weren't totally locked in. Our execution was very poor tonight and making the easy play in transition was something we struggled with and will need to clean up before our next game.
“Levi Izer had a nice game and was on attack mode throughout the night. Jordon Snyder once again brought the spark off the bench that initiated our big run in the second quarter with his energy and instinct. We were very balanced with six players scoring over eight points,” Sullivan said.
Levi Izer tallied 12 points, had three assists and one steal. Evan Drilling had 10 points, including two three-pointers, four assists, three steals and one block. Jordon Snyder had 10 points, including one three-pointer, seven steals and two rebounds.
Keegan Balk had eight points, six rebounds, four assists and two steals. Ethan Leibold had eight points, three rebounds, two assists and two steals. Eli Nymeyer had eight points, three rebounds and two steals.
Mason Goerend tallied three points on one three-pointer. Kyle Langreck had two points and three rebounds. Luke Anderson had one point, two rebounds and two steals.
The Trojans made 23 of 52 field goals, including four of 14 three-point attempts, made 12 of 16 free throws, had 20 rebounds, 19 steals and 13 assists.