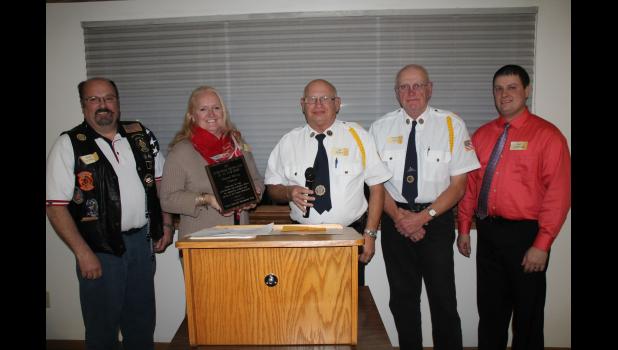 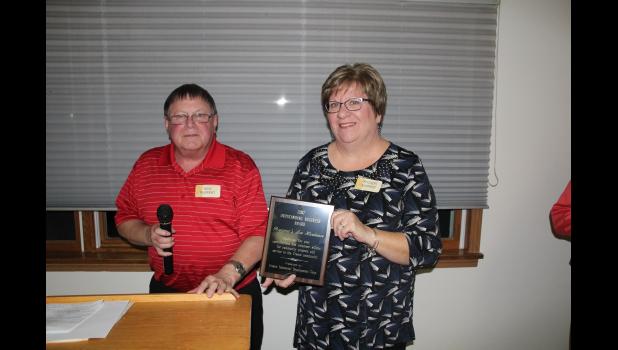 By:
Marcie Klomp News Editor tpdeditor@crescotimes.com
CRESCO - It was a time to pat some locals on the back, as well as celebrate a great year for Cresco Area Chamber of Commerce and CIDC (Cresco Industrial Development Corporation).
A banquet was held Nov. 10 with lots of laughs and good-natured ribbing when a person won Boone’s Farm during the wine pull. Some of those laughs were probably recalling some younger days when that was the brand of choice.
More fun was had when the honored business and organizations of the year were announced. Nick and Rhonda Ruppert were happy to accept the Outstanding Business of the Year award for Ruppert’s Ace Hardware, and Howard County Veterans were happy to be awarded the Outstanding Organization of the Year for all the work they did on Freedom Rock Memorial Park.
Jason Passmore, Howard County Business & Tourism Director, stated, “Ruppert’s Ace Hardware and Rhonda and Nick are staples of this community. We can always rely on them being open.” He also acknowledged they bought into customer service by making everyone feel welcome in their store.
Nick said, “It is an honor to receive this. Talk about customer service—I’d like to thank our help for that.”
Rhonda added, “We’d like to thank all of you who have supported us. We were going to be here for five years, and here we are 30 years later. We love this town.”
Passmore introduced the veterans by giving a history of the Freedom Rock project. “It was a long process that started 3-4 years ago. I learned that when a meeting is called with the veterans for 6 p.m., they were there at 5:15!” In addition, he said the committee made sure the entire county was involved.
Jim Perry, Commander of the American Legion and chairman of the Freedom Rock Memorial Park Committee said, “Thank you to each and every business and person who helped. So far, we have exceeded $130,000 in donations for this project. No way did I think we’d make that much. I truly believe God had his hand in this from the beginning. We are just his servants.”
Other awards handed out were anniversary years to area businesses.
One: Legacy Gym and Ox & Wren Spirits & Gifts
Five: Geothermal Eco Options, Cresco Fuel and K&M Metal Designs
10: Hometown Accounting
15: Northeast Iowa Appliance, Northeast Iowa Community College, Cresco Foods Technology
30: Cresco Motor Co.
31: Alum-Line Inc.
35: V&V Insurance
55: Bob’s Electric
100: Farmers Win Co-op
115: Regional Health Services
125: Howard County Fair Board
Mary Ann Neuzil, president of Chamber Board of Directors recognized others on the board: Ryan McCarville, Hillary Klimesh, Jen Burke, Dan Evans, Katie Ferrie, Katie Hudek, Cassie Martin, Jennalee Pedretti, Kris Riley and Jan Carman (City of Cresco representative).
She named some of the highlights of the year, including Family Fun Night, the flight breakfast, golf outing, the CHS scholarship to Dawson Gosch, Norman Borlaug Harvest Fest, Family Feud and more. “And then there was RAGBRAI’s overnight stop with 24,000 riders, 5,000 support staff, 187 days of planning, 40 bicycles given away, over 700 t-shirts sold, 9,048 cans of beer and 250 volunteers. We had money left over, which was returned to vendors and to Prairie Springs Recreational Trails. Eighty-five hundred was also put into a CD for seed money for the next time it goes through.
“Wow! What a year. Thank you for your continued support.”
Andy Ludeking, president of the CIDC Board of Directors, thanked the rest of the board, including Jerome Waterbeck, Gary Kelm, Chuck Malek, Scott Thomson, Donna Thomas, Gary Aspenson, Tom Barnes, Mark Cuvelier, Scott Fortune, Gary Gooder, Dick Holten, Bob Story, Dan Huiskamp, Steve McCarville, Bart Wilson, Amy Bouska (City of Cresco representative), Don Burnikel (County Supervisors representative) and honorary members Craig Morrison, Lowell Sovereign, Tom Ryan, Dale Turnmire, John O’Byrne and Jerry Wilson.
Ludeking said the organization had $328,000 in the Revolving Loan Fund for 2016-17, which created 48 new jobs and retained 11. “There is over $500,000 in circulation from the RLF and another $500,000 available.”
New businesses and expansions included Atomic Pizza Pub, Novelty Nook, Dasch Mercantile and Bathhouse, Holstrom Gifts on Elm, Dollar General, Ox & Wren, Reicks Monument & Stone, Bodensteiner, Veteran’s Freedom Rock, Cuautla Jalisco (Mexican Family Restaurant), Murphy, Coe & Smith and the new Crestwood High School stadium.
The group also worked on several projects including a hotel/motel survey, housing rehabilitation and RAGBRAI.
The evening ended with a live auction. All proceeds went to the Howard-Winneshiek School Foundation. Over $4,500 was raised for the organization.