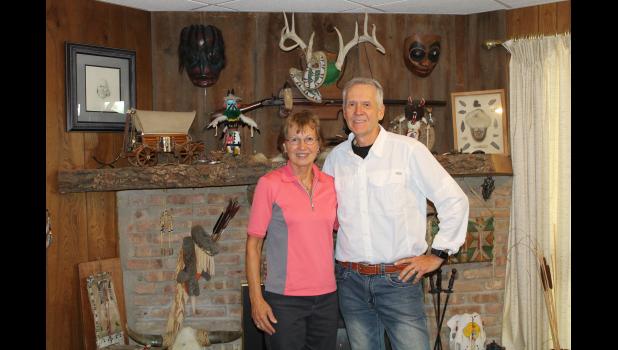 Citizens of the Year named

By:
Marcie Klomp News Editor tpdeditor@crescotimes.com
Vernon Springs - It seems as though their entire lives have been geared toward service for others. After long careers as teachers at Howard-Winneshiek Community School District, Mark and Brenda Steffens Johnson continue helping others in many facets of their lives.
With all their volunteerism, they were chosen as Citizens of the Year for the Times Plain Dealer’s awards ceremony, to be held May 30.
The unassuming couple are very passionate about many things close to their hearts. Perhaps the most recognized passion is the winter trail system surrounding Prairie Springs Nature Center and other portions of Vernon Springs.
Growing up, Mark enjoyed scouting and helping others, eventually making Eagle Scout. Brenda grew up on a dairy farm, helping with and showing animals. “I’ve always been an outdoors person,” she said.
The couple met while teaching at H-W, Brenda as a junior high P.E./health teacher and coach and Mark as an English/reading/Talented and Gifted teacher. They’ve been married since 1976 and consider themselves lucky to have thousands of youth to call their children.
One of their main hobbies is anything outdoors. They embraced cross country skiing along with the rest of America when Bill Koch won the silver medal for cross country skiing at the 1976 Olympics.
That got people interested in the sport . . . including the Steffens Johnsons. They started training, along with Larry Kane, for the Birkebeiner, the largest cross country ski races in North America at Hayward, Wis.
If they were going to train, they needed trails. “We talked to land owners and used the golf course and expanded to Turkey Bend.” Just like “Field of Dreams,” they found, “If you build it, they will come.”
With trails on which to ski, the couple and others had local races, through the Upper Iowa Ski Club. In 1980, Mark mentioned they purchased a snowmobile to help drag the trail. They’ve come a long way. Now they have one of the newest models of trail-grooming equipment available. It is the one used for the Olympics.
Because of the support of members and the community, the club was able to purchase bigger and better equipment over the years. They even built a portable bridge to go from one side of the river to the other.
“We saw this as a way to promote skiing and promote the community,” Mark noted.
The couple and other club members were also instrumental in organizing the Iowa Challenge Cup. They organized the Challenge by having six places in Iowa to race . . . Vernon Springs, Pilot Knob State Park near Forest City, Waterloo, Cedar Rapids, Decorah and Backbone State Park near Dundee.
Brenda said, “Skiers were to attend five of the six races to receive points, and the winners were awarded trophies.” She won the women’s trophy in 1988.
With their love of skiing, the couple opened a ski shop across from Cresco City Hall for a few years.
While both served on the Northeast Iowa Tourism Board, Mark and Dale Vagts, a snowmobile enthusiast, worked toward making the area a winter hub for Iowa.
Mark credits Brenda as being the architect for the trail and getting it ready to groom. “After retiring in 2008, George Freidhof and I got into trail work.”
They cleared a new trail on the north side and set up a trail system. The south side was cleared for snowshoeing.
Brenda credits Mark with doing a great job in grooming and taking care of the social media page at Facebook.com/skicresco/.
They both appreciate all the help others,  including members of Howard County Conservation, who help with equipment, have given to the trails,
Their hard work has paid off over the years when folks drive from all over Iowa, as well as Minnesota and Wisconsin, to ski the trails. They know they are well-maintained. The couple was really paid off in 2017, when Vernon Springs was named the alternate for two Iowa Games cross country skiing events.
With poor conditions in Dubuque, the Games came to Howard County! Vernon Springs was then named the official spot! Unfortunately, warm conditions cancelled the event. But Mark and Brenda are looking forward to next year.
The Citizens of the Year love the winter trails, but they find time to volunteer elsewhere as well.
Mark is the technical wizard and helper for Norman Borlaug Heritage Foundation. Brenda helps at Meals-on-Wheels and picks up sticks and garbage on her walks.
Together they help with each others’ projects and volunteer at Cresco Methodist Church.
When they learned they were given the prestigious honor of Citizen of the Year, the humble duo wanted everyone to know it isn’t about them.
Mark said, “Truly, a lot of people helped us get it done.”
Brenda added, “I feel it’s definitely an honor to be chosen, but there are other people deserving as well. It is very much appreciated.”
When new teachers are hired, they are given a bus tour of the area and treated to a lunch at the Cresco Country Club. When Mark and Brenda joined the faculty, they ate at the Tower Club. As he was looking at the scenery, Mark saw a house on a hill and thought to himself, “I’m gonna buy that house someday.”
In 1983, with his wife by his side, he did. The couple moved to Vernon Springs, on a house on a hill, overlooking the woods and trails they keep groomed for others.
Contemplating it all, Mark said, “Without the community’s help, we couldn’t have done what we did. That’s why we’ve been in Cresco for 40-some years, because people get involved to do stuff, and we feel we want to do our part.”
Well, Mark and Brenda have certainly done their part and then some. Thanks to you for making this part of the world a nicer place to live and play.