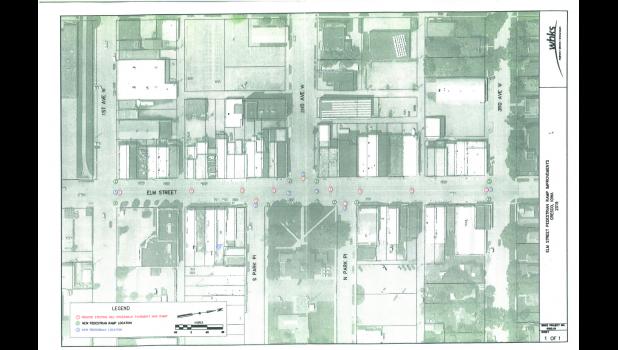 By:
Marcie Klomp ~ News Editor tpdeditor@crescotimes.com
CRESCO - A half-dozen business property owners along N. Elm St. spoke against the City of Cresco’s proposal to replace all the sidewalks, even the ones that had been re-constructed in 2019 and 2021, in the crosswalk project.
Daren Sikkink and Scott Huneke from WHKS, City Engineers, reported on the steps that need to be taken to move forward with the crosswalk project during the Nov. 7 bi-monthly meeting.
The City of Cresco is replacing the crosswalks and curbs and putting in ADA compliant ped ramps that need to tie into the sidewalks.
Sikkink told property owners they would not be charged more than what they had received as an assessment in the mail, but it could be less.
The average assessment for the 48 properties is $4,900 and included paying for 90% of the sidewalk and 50% for the curbwork. The City would pay the remainder, as well as the crosswalks and ADA compliant ped ramps. The estimated cost of the entire project is nearly $800,000, with property owners being assessed about 30% at $252,000.
Sikkink explained the project will be phased block-by-block and section-by-section.
In 1983, the watermains infrastructure had been replaced and are holding up well and will not be part of this project. At the same time, the street and crosswalks were laid and are showing their age.
The project is more complicated than a person may think. The engineers need to figure out the required ADA compliant slopes and design a grade that allows rain runoff.
An added difficulty is the difference in heights of some buildings compared with others. Several of the businesses have a larger slope, as their building was built with a step. To allow wheelchair access, over the years, owners have made a slant to take away the step. All of these issues need to be addressed for a uniform slope. “We will make it as compliant as we can,” noted Sikkink.
Part of the project is also taking the current eight east/west crosswalks down to four and leaving all of the north/south crosswalks.
Audience members were then able to air their grievances at the council meeting. The speakers were against the sidewalk part of the project.
Two individuals sent a letter. Jim and Connie Zahasky wrote they felt the City should contribute at least 50% of the cost for the sidewalk. “Who knew owning a business in Cresco was so expensive?” They also asked council to consider some of the sales tax the city receives from the Elm St. businesses.
Jeff Leeper (Eye Care Associates) wrote a letter and also attended the meeting. He wrote a letter of protest saying he will have to replace three-year-old concrete for $4,678.24. When he spoke, Leeper said, “I [redid my sidewalk] because I have wheelchair patients. We have done a lot of business from people in wheelchairs, and it has never been a problem.”
Barb Prochaska (Erickson-Prochaska Realty) also said her concrete is good. It had been replaced in 2014. “It’s ridiculous to rip up new cement,” she said.
Phil Henry (Stitches & Prints) explained, “I spent the money to fix it. That’s a lot of extra money to pay out. I fixed what I had. I did the right thing, then I get hit with this.”
Roy Gorter (Leuthold’s) was the only property owner in favor of the project. He said the current state of the crosswalks and sidewalks are not a good representation of Cresco.
Alex Buls (former Conection business) said when he purchased the property he had it inspected. “The sidewalk is perfectly fine. Can you just do from the red bricks to the curb? Leave the rest that is okay?”
Mark Brincks (122 N. Elm St.) asked about the water shut-off and valve boxes, which will be replaced if necessary. He added, “Ossian is in the process of doing the same thing, and it looks really nice.”
Mayor Dave Brenno then asked the WHKS representatives what other towns do, regarding concrete that had recently been put down.
Sikkink said some charge them a lower percentage for assessments. Most towns only go back five years for the special assessments. For Cresco that would include two businesses.
Council person Gary Kriener asked how much the difference in cost would be to leave the newer concrete and work around it. Sikkink commented it would make the construction harder. Kriener opined the extra expense would then be shared by the other property owners.
City Clerk Michelle Elton explained that those who do not pay their entire assessment can have them put on their property taxes. The interest on that is usually just 1% over the bond interest.
After the discussion, Council person Jan Carman made a motion to do the entire project but reduce the assessment on those who have replaced their sidewalks in the last nine years to 50%. It died for lack of a second.
Rich McConnell then made a motion, seconded by Alex Fortune to adopt the Downtown Crosswalk Reconstruction entirely. The vote was 3-1 (Carman against) and failed. With a special assessment, the vote had to be 75% vote in favor, or four of five voting aye. Amy Bouska was absent, so it did not pass.
The Council unanimously approved the resolution to defer the decision to the Nov. 21 meeting.