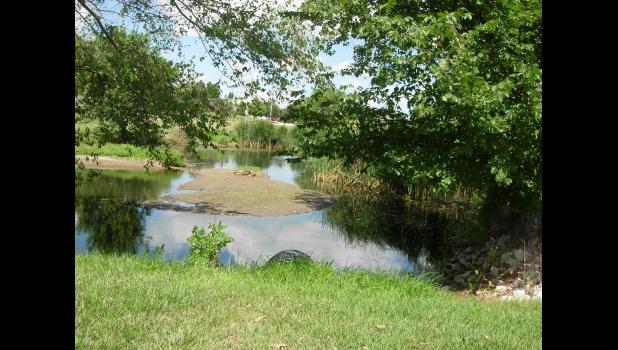 By:
Marcie Klomp News Editor tpdeditor@crescotimes.com
CRESCO - Public Works Director Rod Freidhof reported the pond in Malek’s Addition, north of 8th Ave. East, needs attention.
The pond, which was installed in early 2000s, has been collecting sediment since then from runoff. He later said the pond should be drained, removing sediment, every five years.
He suggested putting in a drain, so the water could be let out to clean out the deposits. To completely drain the pond, it would take about 450 feet of pipe to take it to the closest outlet.
“I think we could get by with draining it to the five-foot level. That would just need 140 feet of pipe.”
The city cleans all the storm water outlets from time-to-time, which is why he feels this is a city job and not a property-owner job.
• In other business, Freidhof advised Regional Health Services asked to put signage up on the walk/bike path explaining the benefits of walking. The signs are not permanent and will be taken down before winter.
• RAGBRAI® went well according to Freidhof, who served as chairman of the public safety. “We heard many good comments.”
Mayor Mark Bohle read a letter from the president of the University of Iowa RAGBRAI® team, who was thankful for the leadership of the city council in making the event a lot of fun for the university’s cycling team. Bohle then stated he was impressed with the entire turnout of volunteers, including community, City employees and other volunteers.
• Police Chief Tim Ruroden left a note asking council’s advice on a new police car, which has been budgeted. In the past, the City has gone with Chevy. Since the last purchase, Chevy is going out of that type of business and only has 2016 models available.
Council was leaning toward going local with the Chevrolet car, as it would not have to be taken out of the county to be worked on, although Councilwoman Amy Bouska did mention hybrids were coming down in price.
• City Clerk Michelle Girolamo reported Bill Caffrey of Park & Rec asked to run a Twins trip through the City instead of him doing it on his own. He ended up getting eight sponsors to make it cheaper for youth. Two buses went. Girolamo laughed the project made $5.00, but it was a great trip.
• It was announced elections for mayor and council were coming up in November. Those whose seats are up include Mayor Bohle and council persons Bouska in District 2 and McCarville At Large. Affidavit for Candidacy can be turned into the Auditor’s office Aug. 28-Sept. 21.
• Girolamo announced Alliant Energy was planning to put in new smart meters in the next year for all of its customers, including Cresco residents. The smart meters will help with faster detection when there is a problem and more.
Customers will be notified three times before the installation takes place.
It will probably take 12 months before the switch over, but the company is preparing soon. When they start working, the team of around 20 technicians will replace 900 per day!
• The city clerk also asked if council would allow her to look for an IT support company. “I know nothing about computers,” she laughed. The company would be available to monitor fire walls and other bits of technology.
The next Cresco City Council meeting will be Monday, Aug. 21 at 7 p.m. at City Hall.