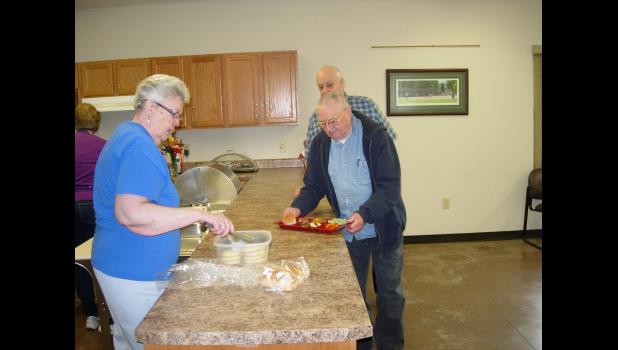 CRESCO - According to Patty Scholtes, Senior Specialist for Northeast Iowa Area Agency on Aging, the Cresco mealsite is facing some changes.
Meals will still be served at Kessel Lodge Monday-Friday at 11:30 a.m., and Meals-on-Wheels will still be delivered.
What is changing is that a volunteer or volunteers will now be running the site, rather than long-time employee Deb Smith, who has been there 11 years.
Due to budget cuts, Smith’s position was eliminated. Friday, April 28 was her last day. Although she could see the writing on the wall, it still came as a shock to be told April 21, she would no longer have a job in another week.
Until January 2008, meals were cooked and served at Champlin Hall. On Jan. 1 of that year, they were then transported from Decorah.
The seniors took it upon themselves to raise funds to help with the construction of a new mealsite, the current Kellow Lodge. Dick Wagoner was one of the seniors who helped raise over $15,000 for the building.
Things were pretty steady with the mealsite until March, when breakfast was no longer served. “It wasn’t making money,” said Scholtes.
The mealsite is still open from 8 a.m. to 1 p.m., with lunch being served at 11:30 a.m. Until volunteers are established, Scholtes will be manning the mealsite.
For those who enjoy the fellowship and having breakfast out, some have volunteered to bring in rolls and other items.
With Smith being gone, volunteers are needed. Scholtes said it could be one volunteer or several people can volunteer for a week at a time.
The volunteer system has worked in Protivin, Waukon, Calmar and Guttenburg for many years.
Sally Myers, head of Nutrition Services for the 18 counties in NEI3A, spoke with seniors on Tuesday morning, May 2 to make a plan.
Anyone wishing to learn more, or volunteer, can call Scholtes at 563-379-9737.