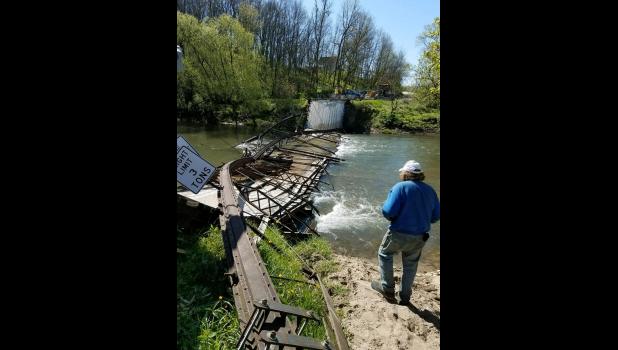 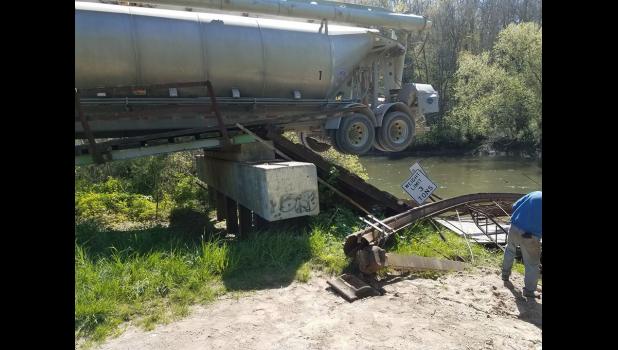 Winneshiek County - According to a press release from the Winneshiek County Sheriff’s Office, an overloaded semi crossed Daley’s Bridge, northeast of Cresco, on Friday, May 5.
The Iowa State Patrol received a call at 9:14 a.m., with officer Solberg responding.
The driver of a 2016 Mack tractor/semi-trailer, Justin James Hippen, age 29, of Parkersburg, Iowa was westbound on Cattle Creek Road, approaching Daley’s Bridge. He disobeyed the 3-ton weight limit sign for the bridge. As he was crossing, approximately three-quarters of the way across, the entire bridge collapsed into the Upper Iowa River. The driver was uninjured.
The truck, which had Sinclair Milling, Parkers-burg painted on the door, came to rest on the west side concrete support facing west.
Some sources claim the driver was trying to deliver a load, and his GPS system took him to the bridge.
It was estimated that damage to the 4,141 foot bridge is at $775,000.
On the Winneshiek County Sheriff’s Department Facebook page, it was stated, “Until the engineer’s office is able to clear bridge debris from the river, canoes will be unable to navigate through the Upper Iowa River at this location. This bridge is located between Coldwater Creek and Chimney Rock.”