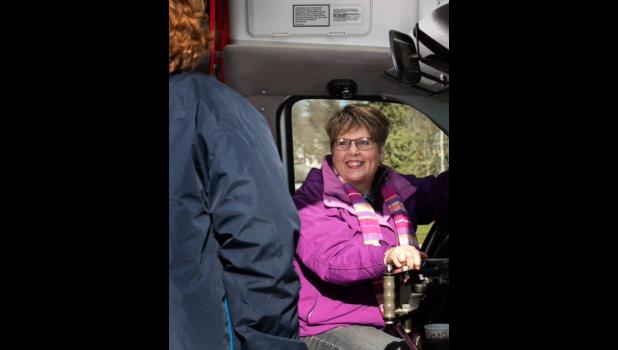 By:
By Sara Stromseth-Troy TPD Staff
Northeast Iowa - As winter sets in, Howard County residents of all ages may choose to take advantage of EARL Public Transit to shuttle them to and from school, appointments, or the grocery store.
EARL (Easy, Affordable, Reliable, Life Changing) Public Transit serves a five-county region, including Howard, Winneshiek, Allamakee, Clayton and Fayette Counties. All vehicles are fully accessible and are equipped with either ramps or lifts, and some have bicycle racks.
Local EARL Public Transit driver Melissa Foley is a familiar face to those who use the transportation service, and she says every day is an adventure.
“No two days are the same,” she said.
Foley drove for Northeast Iowa Community Action Transit for the past nine years, and now drives the EARL Public Transit vehicle.  She is one of numerous drivers serving Cresco’s public transportation needs.
“There are six or seven drivers in Cresco, and everyone is busy every day.” She said. “We have people we take for dialysis, who are wheelchair bound, three days a week. We provide transport service for both nursing homes.”
“We take children from morning preschool to daycare centers, and (school-age) children to school.”
Foley is a familiar face to the area’s preschool children.
“When Howard-Winneshiek had discontinued its bus service around Cresco a few years ago, and with so many parents working, there was no way to get children who finished the morning preschool to the daycare centers. Now, EARL Public Transit provides transportation to the children,” she said.
“We either take kids home from morning preschool, or bring them to the afternoon preschool session,” Foley said.  We average 25-30 children riders every day.”
Foley said they also transport students to school, especially on cold winter days when they don’t want to walk.
“I usually begin my day at 7:15 a.m. and pick up the younger kids, and also Crestwood or Notre Dame students. When it gets cold or rainy no one wants to walk. I try to get them all to school by 8 or 8:05 a.m.,” she said.
In addition to serving the transportation needs of children in Howard County, EARL Public Transit also welcomes riders of all ages; in particular, it serves the elderly, many of whom no longer drive their own vehicles.
“A lot of people we take to work who don’t have cars. There are also a number of elderly people who are still able to live in their homes through home health care, but don’t drive, so I take them to the beauty shop, doctor appointments, grocery store, sometimes every week.” Foley said. “There are people in their 80s and 90s who aren’t comfortable driving, so we do that for them instead.”
EARL Public Transit also shuttles people to appointments outside of its five-county region.
“We provide transportation to a lot of medical appointments; people go to Rochester, La Crosse or Iowa City. Some services are covered by people’s insurance, others are self-pay, but the service is available,” Foley said.
In-town rates to ride EARL Public Transit start at $2. To ride round-trip, the cost is an additional $2. For tickets, contact EARL drivers, or a book of 10 tickets is available for purchase at $20.
To make a reservation to ride EARL Public Transit, call 1-866-382-4259 between 5 a.m.-5 p.m. Monday-Friday. EARL Public Transit requests trip reservations at least 24 hours in advance. Same day trip requests are accepted but not guaranteed. Service time in Cresco is 7 a.m.-4 p.m. Monday-Friday.
“Just give us a call; anyone can ride,” Foley said, “We also have a Facebook page that gives updates if there are schedule changes or if the weather is bad.”
Foley said there have been many memorable moments in her driving career, and those she most enjoys involve the candid commentary she hears from her passengers.
“Little kids in general are fun; they share everything. Sometimes they’ll share that Mommy’s having a new baby before anyone else knows. There is a little boy whose dad drives a truck, and one day we passed what I thought was his truck. The little boy said that yes, that was his dad, but that the truck was ‘old’, and that his dad had bought the truck before his son was born. The boy was 3 years old. I laughed about that one all day.”
She also appreciates how her older passengers tend to say what is on their minds, and she especially enjoys hearing unique expressions or turns-of-phrase popular in previous generations.
“I love hearing those old expressions; you just don’t hear those every day,” Foley said.
Foley said she feels public transportation is an important service to the community.
“I feel it’s very much needed,” she said. “I don’t know what folks would do if they couldn’t catch a ride. It keeps people feeling independent; they don’t have to rely on calling their children all of the time. In the case of younger children, it’s a step toward independence in not having their mom pick them up all of the time.”
Foley looks forward to continuing to serve the transportation needs of Howard County residents.
“We’re open to the public, and I’m happy to pick up anyone who might need a ride anytime or anywhere; I love to be of community service as needed,” Foley said.
EARL Public Transit is operating under Northeast Iowa Community Action Corporation.