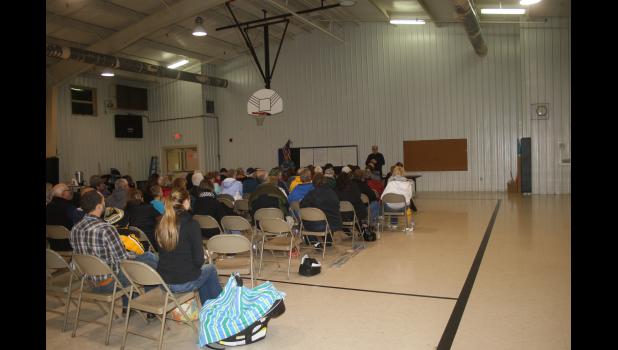 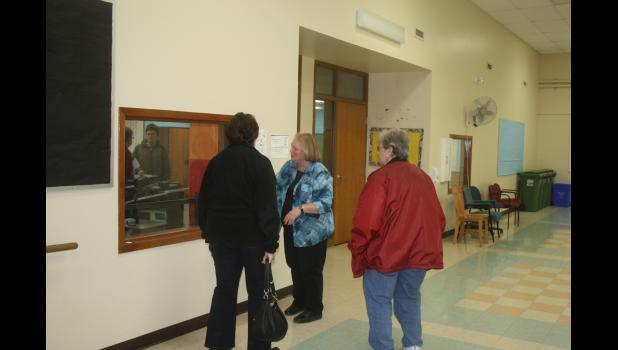 By:
Marcie Klomp News Editor tpdeditor@crescotimes.com
Elma - Three years ago, the citizens of Elma were devastated when the local elementary was closed by Howard-Winneshiek School District due to low numbers and expenses. Since then City Council and town leaders have been trying to find a way to make better use of the building.
A solid group of concerned citizens, numbering over 75, attended a community meeting on Nov. 13, where the main discussion focused on relocating the present library to the former school. Other issues on a wish list are to move the daycare into the building as well, allowing Regional Health Services of Howard County (RHSHC) to take over the daycare facility.
Background
With RHSHC bringing up the possibility of a clinic opening in Elma this past April, talk began with renewed vigor on what to do with the old school. City Clerk Shannon Gebel explained RHSHC didn’t realize there were so many young families in the area.
RHSHC officials looked over a few locations, with their first choice being the school facility, and more specifically the daycare area.
That left the question of where to put the daycare. With plenty of space available inside the school building, that was the best option.
The school building would provide more space and allow separation between the toddlers and infant rooms.
And as long as remodeling would be taking place, why not relocate the library?
The thought of having a larger space for the facility was very appealing to librarian Renee Burke and the library board. The building had been constructed around 1975 and, although well-maintained, is starting to show its age. The board recently had to reshingle the north side after a leak, the water heater is likely original to the building, and there are a few replacement, updating and freshening up projects on the calendar.
With thoughts of relocating the library, a Library Planner, George Lawson, was commissioned, as well as Skott & Anderson Architects to look at options in the school building.
The plan’s have the library moving into the former cafeteria and preschool areas. The daycare will utilize the Blue Room (classroom area) and three-year-old preschool. The art room would become a multi-purpose room.
Library relocation pros, cons
Locals were asked what they liked about the present library. Answers included easy parking, location, set up/division (with kids down below and adults on upper level), cozy and warm atmosphere, half the roof is new and the building is in good condition.
Some negative issues about the facility included not convenient for daycare visits, too small for some children’s programs, children’s section is small and shelving is too tall, little storage, HVAC needs to be replaced, and it is an extra building for the city to maintain.
When asked, Lawson stated, “The space is virtually the same, but the new space would be more flexible and is located on all one level.”
Burke noted, on average, three children and 20 adults visit a day.
One of the biggest positives for moving to the school building would mean the daycare could just walk across the hall to get to the library. The school is also the bus stop for both Howard-Winneshiek and privately-owned Riceville buses. It would be more convenient for students getting off the bus to stop at the library. State aid is based on traffic, so with more youth visiting, there is a chance for more operating funds.
It was also mentioned cooking classes could be held since the kitchen is still set up. The larger space would allow more programs as well.
One person stated having all the amenities (city hall, library, daycare) under one roof, with the clinic next door, would make the building a town center.
The biggest concern of those at the meeting was paying for the renovations and the additional taxes the project would create.
One argument was it would be just one building to maintain, indoors and out. Lawson mentioned all the grants available for libraries and other projects, as well.
History
The elementary closed at the end of the 2014 school year. The preschool ran one more year, and the building was transferred to the City in June 2015.
City Hall moved from the old Rainy Clinic to the building in April 2016.
The gymnasium is used for various meetings and events throughout the year, as well as being used by the daycare during the winter and by walkers year-round.
What now
The City is still contemplating what to do.
The sooner a decision is made, the sooner a clinic will be moved to Elma. Gebel explained RHSHC board has already approved opening a clinic, as has the state. Now they are just waiting for a location. “Once they have a physical address and the state approves it, it could be open in six months.