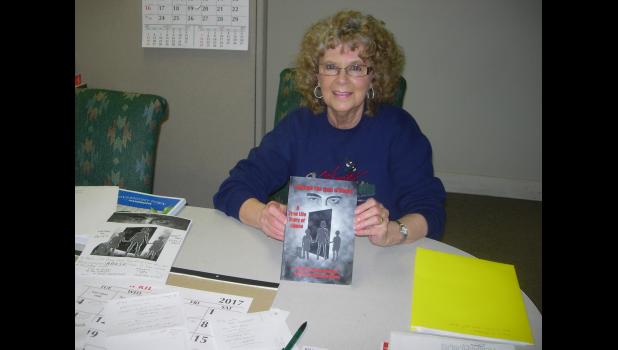 By:
Marcie Klomp News Editor tpdeditor@crescotimes.com
CRESCO - Driving down the tree-lined streets of Anytown, U.S.A., it is hard to imagine what is happening behind the curtains of those quaint homes.
On the outside it seems all candy and roses, but on the inside it is dark and scary.
That is what one family is trying to explain in the book, “Through the Eyes of Denial — A True Life Story of Abuse,” written by twins Robert and Richard Aberg with help from sister, Sherri Tlusty; mother, Carol Dunt; and grandmother, Cecelia Halweg.
The family grew up in Cresco. Dunt stated, “I was a young girl of 17 who was taken advantage of by a 27-year-old man and had to get married. I didn’t want to, but that’s pretty much what you had to do in the 1960s to give the child a name.” Three years later she had twin boys.
“I and my children suffered with this man for 21 years. Many times I had tried to leave him, but it never worked as I was afraid. If you are not in this situation, you really don’t understand what it is like.”
Dunt says she tried to get out of the relationship. She even called the local sheriff’s department. “Mark Grin-haug was my life saver, as was our neighbor, Leonard Riha, who was a big help.” She would leave, and her abuser would tell her things will be different. “It was always different . . . for a while. But it never stayed.”
With the help of her neighbor and mother, Dunt, with one of her sons, got into a shelter in Decorah. The other son stayed with his father for a while until his grandmother helped get him out.
“My daughter was 19 at the time, and my boys were 16. When my husband pulled a gun on my daughter and her boyfriend, they moved me and my son to a shelter in LaCrosse.” New Horizons was a wonderful place for Dunt. They would disguise her every time she’d leave the shelter.
Her daughter moved in with her boyfriend’s parents, Don and Eileen Tlusty.
They all remember the abuse.
The book has been in the making for 10 years. Dunt said, “My boys, Robert and Richard Aberg, have written the book. It’s  true life story written from five different points of view of the abuse we suffered. I believe if anyone who is in this situation would read this book, it would help them to see that they are not alone, and there is help out there.”
After getting out of her marriage, Dunt found a man who treasured her. She has been married to Bim for 35 years, but even in those early years, when she completely trusted him, she slept with a knife under her pillow. Over the past 35-40 years, the family has slowly been healing.
Sherri is still married to Mick Tlusty, and she volunteers at a rescue puppy mill in Colorado Springs; Robert lives in Madison, Wis.; Richard is married with two children in Freemont, Ohio; and Cecelia lived a good life, passing away at the age of 94 in February 2017.
Dunt is starting to volunteer at New Horizons shelter in LaCrosse, since it helped her when she needed it.
The book has helped with that. Dunt said, “If it can help anybody, it’s the reason for the book.” “Through the Eyes of Denial” has received some five-star reviews and is already starting to work, she noted.
In addition, she feels the final chapter says it all, “We are still standing,” but she also admits it’s by the grace of God.
“Through the Eyes of Denial — A True Life Story of Abuse” can be purchased online.