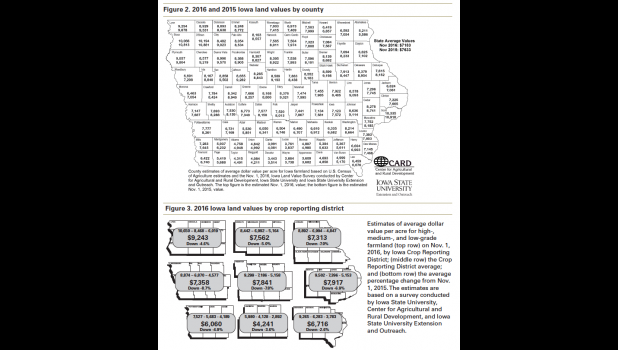 AMES - According to the Iowa Land Value Survey presented by Dr. Zhang, Iowa State University Extension Economist, at a news conference on Dec. 13, the state saw a 5.9 percent ($450) decrease to $7,183 in Iowa farmland values from November 2015 to November 2016.
This represents a modest decline in Iowa farmland values, and reveals that land values have decreased three years in a row. This unprecedented consecutive drop reminds many of the painful farm crisis in the mid-1980s.
However, despite continued downward pressures on farm income and farmland prices, current Iowa farmland values are still more than double what they were 10 years ago, 64 percent higher than the 2009 values and seven percent higher than the 2011 values.
Howard County’s average value is $764 below the state’s average at $6,419, down $438 from 2015’s value of $6,857 and 2013’s high of $7,824. Howard is actually lower than its surrounding counties.
Winneshiek County’s average value is at $6,592, down from $7,054 in 2015.
Chickasaw is at $7,084 compared to 2015’s $7,567.
Mitchell County value per acre is $7,503, compared with 2015’s value of $7,999.
The 2016 ISU survey shows that all nine crop reporting districts and all 99 counties in Iowa reported a loss in average land values in 2016.
The largest district-wide decrease in value was in West Central Iowa, which reported a drop of 8.7 percent, bringing farmland values there down to $7,358 per acre.
The Northwest district, which reported an increase from November 2014 to 2015, also saw a 4.6 percent decline this year. This is largely driven by changes in the livestock industry—livestock producers braced for a tougher environment over last couple months and hog, livestock, and dairy prices have also dropped by more than 30 percent compared to two years ago.
The smallest decrease was reported in the Southeast district, 2.6 percent, bringing values there to $6,716 per acre.
Additionally, all 99 counties reported a drop in average land values this year, ranging from 8.4 percent in Monona County to 2.0 percent in Decatur, Appanoose, Wayne and Lucas Counties.
This year’s survey also revealed different patterns in land values across different land quality classes: while state-average values for high-quality land decreased 5.9 percent, there was only a 3.5 percent decline for low-quality farmland values.
In addition, low-quality land in the Southwest and South Central districts were the only areas to show an increase in average values, reporting gains of 2.9 and 5.2 percent, respectively. This is likely a combined result of strong recreational demand, higher government payments from conservation programs such as the Conserve Reserve Program (CRP), and limited land supply.
In general, the results from the 2016 Iowa State University land value survey echo results from other surveys.
There were several new features added to this year’s survey. A few of the highlights are:
• In addition to asking respondents about the buyers of farmland purchases, there were questions on who sells land. The majority of farmland sales, 53 percent, were from estate sales, followed by retired farmers at 23 percent. Active farmers account for 12 percent, while investors only sold nine percent of farmland in Iowa.
Additionally, 74 percent of all farmland purchases were to existing farmers, of which existing local farmers and investors and new farmers account for another 22 and 3 percent, respectively. This suggests that Iowa farmland market is featured with “local farmers buying local land.”
• Second, respondents were asked to predict how the land values and cash crop prices in their county would change in November 2017, 2018, and 2020.
In general, respondents are expecting a slight improvement in the cash crop market: the expected cash corn and soybean prices for November 2018 are $3.60/bushel and $9.48/bushel, which is higher than current and expected November 2017 levels.
Respondents also expect the land market to stabilize and even slightly increase next year, but the majority also forecasted a decrease from 2017 to 2018.
• Third, this year’s survey asked about the number of years’ experience of respondents and number of counties they offer services in. Results show that agricultural professionals on average have over 20 years of experience in their current profession and offer service to an average of 10 counties.
It is important to remember that the Iowa State University survey is an opinion survey, as are the surveys conducted by Federal Reserve Bank, USDA and the Realtor Land Institute. The respondents are different — the ISU survey relies on farm managers, appraisers, brokers and agricultural lenders.