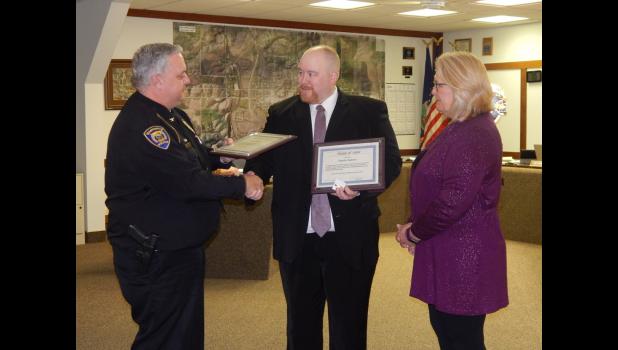 By:
By Sarah Kessinger Editor, Publisher The Marysville Advocate
Marysville, Kan. - Five law enforcement officers were recognized Feb. 26 for quick efforts this past year that resulted in saving lives and in detaining armed fugitives.
The men received Awards of Valor by the city of Marysville during the City Council meeting at the Marysville City Building. Family and friends gathered to applaud their efforts.
Two officers, including 1996 Crestwood graduate Tim Anderson, son of Mark and Karen Anderson of Cresco, were recognized for their role in stopping the armed men who escaped after setting fire to the Marshall County jail last fall. Three other officers were lauded as well.
Honored were former Marysville police officer Tim Anderson, who was recently named administrator of the Marshall County jail, Police Chief Todd Ackerman and police officers Todd Packett, James Leis and James Kern.
Anderson’s award resulted from his response Oct. 14, 2017 to an urgent call that the jail was on fire. As he prepared to evacuate inmates, two loud noises sounded from the jail’s basement, the citation said.
Running to the back of the jail, Anderson met Marshall County emergency management director Bill Schwindamann, who told him the inmates had taken his truck at gunpoint.
Anderson put the information out on his radio before beginning to search the building’s exterior for the escapees.
“Hearing a shotgun going off, he took cover behind the fire truck and identified both the stolen vehicle moving rapidly toward him and another escapee carrying a shotgun,” the award states.
“Fearing for local residents’ lives, officer Anderson fired into the truck several times and apprehended the escapee with the shotgun,” it said.
Marshall County Attorney Laura Johnson-McNish said later that Anderson “did not hesitate to take swift action to protect his community on Oct. 14, 2017, and his efforts were invaluable.”
“I am always impressed and grateful when all our local law enforcement bands together as a loyal team to serve and protect Marshall County,” she said.
Ackerman was commended for giving chase that day when one of the inmates fled in the stolen truck north out of Marysville on U.S. Highway 77. Ackerman pursued as the escapee forced oncoming traffic off the road, the award states.
“Seeing a moment where it was safe to do so, Chief Ackerman attempted to ram the stolen truck before anyone could get seriously hurt,” the citation stated.
The driver soon was apprehended by Ackerman just south of Wymore, Neb.
Chief Ackerman told council after the awards were given out that he felt the city had a good team of police and he hopes to keep them. The department is currently seeking an officer to replace Anderson, who moved over to the sheriff’s department in his new role.
Marysville and Cresco have about the same population, as do their respective counties. Other similarities include Marysville being home to Featherlite’s competitor and a new jail will be going up this year.