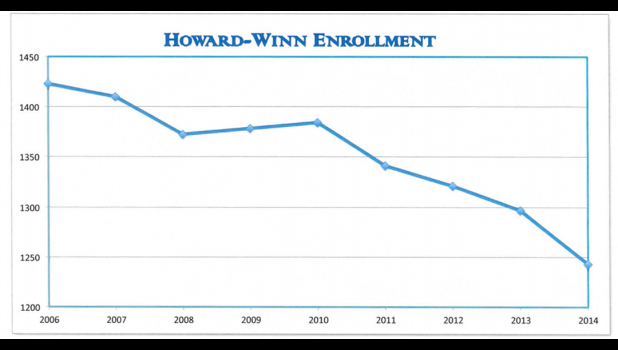 H-W Board looks at five-year plan

Howard-Winne-shiek - Despite making big cuts over the past few years, including closing schools and downsizing staff, Howard-Winneshiek school board members learned they still have a ways to go to keep the school running in the black by the year 2020.

Every business and household knows it should be planning for the future. So it is with How-Winn. Gary Sinclair of PMA Financial has the tools to point out potential trends that could lead to overspending.

The biggest threat to the bottom line is declining enrollment, which over half the schools in Iowa are facing. Smaller and fewer families is one reason. As the population of the county falls, so does enrollment. How-Winn also faced open-enrolling out after the close of the local elementaries—choosing schools better suited to the family dynamic.  But this year, the district actually has one less student open enrolled out versus last year, so the district may be turning a corner.

On average, schools receive $6,489 per student in funding. The official name for this is Regular Program Cost per Student. It's better described as the base amount a district is allowed to spend per student and made up of both state aid and property taxes. In addition to the Regular Program Cost per Student, the District receives categorical funding from the State and Federal governments, including an Instructional Support Levy. Special Dd expenditures are outside of the Regular Program, etc. When schools lose students, they lose money.

Another factor the school board needs to understand is spending authority. The state of Iowa is like your parents. It tells districts how much money they are allowed to spend. You can have money in savings, but you can’t overspend.

Some interesting numbers show the trend for the district’s unspent authorized budget:

Estimated numbers for the next six years are:

The school board looks at these numbers yearly and tries to make decisions based on what will happen in five years. The numbers for 2019 and 2020 were much higher until schools were closed and positions cut.

Those decisions also led to open enrollment to other districts.

Many factors contributed to the loss of approximately 100 students over the past two years. Currently H-W’s model is set for 20 student loss in 2016-17. All of these factors are put into a formula to give school boards an idea of what to expect over a five-year period. Other figures used include anticipated increases in state aid of 2-3 percent per year (the increase was 1.25 percent for the current year) and wage increases of 2-3 percent per year Farlinger notes enrollment, state aid and wages/benefits are the largest components of the budget and the projection year.

As it stands, more cuts are going to be needed to overcome the nearly $2 million deficit in 2020. The sooner they are made, the quicker that number will move closer to a positive one.

• During the regular meeting, reports were given by Supt. John Carver.

The present board decided the District Advisory Committee was a good thing and decided to continue with it. Members of the committee are invited by board members, although anyone can attend the meetings, which are held the first Wednesday of the month.

• Carver stated the Iowa Girls and Boys Athletic Associations have determined that no drones will be operated during games without permission from all schools participating in the sport.

Board member Karlos McClure was glad to hear it, but was concerned about the entire property, not just the athletic fields.

• Representatives of How-Winn met with officials of Lime Springs. The five pieces of property associated with the elementary complex need deeds to continue, but the property transfer was moving forward.

• The district is working on live-streaming the board meetings in the near future.

• Carver will be skyping into the November meeting as he will be out of town at a meeting and hoping to be named one of 10 districts represented in the Lexington Institute.

• The board established the solvency ratio at 10-15 percent, to be reached within the next three years and maintained. Currently H-W’s solvency is at around 20 percent.

Business Secretary Clint Farlinger said, “I’d like to see the solvency ratio at 10-12 percent.” He added that if it is much higher, the district is not spending what it should on the kids.

In addition, it is beneficial for the district to spend as much as needed on special education. Otherwise, the state might not be as inclined to give money for the program in the future.

• After hearing about needing to cut expenses, it was difficult for board members to hear about a master plan for the physical plant, which in the next few years should include updating the high school, remodeling rooms to fit with the current enrollment and upgrading the stadium. The physical plant committee will look at proposals and costs to figure out a maintenance/update plan.

• The next board meeting will again be at the high school media center at 7 p.m. on Monday, Nov. 9.