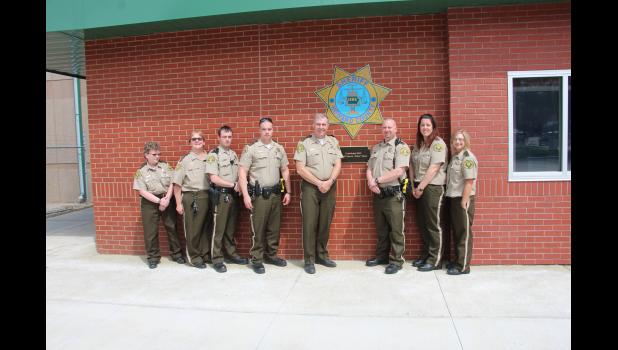 Timeline for Howard County Jail 1882-2019
• June 1882 Supervisor’s Session — Allowed $4,500 for the construction of a jail and Sheriff’s residence.
• 1940 — Sheriff’s residence was modified to put City jail cells in the basement. At the same time, the second story was added for cells.
• Late 1980 — Jail was closed by state
• June 16, 1983 — Open House for updated jail. Included administrative offices for Sheriff and Cresco Police Chief and E-911/Dispatch Center attached to Sheriff’s residence and jail for $140,000.
• June 1990 — E-911 system was added to the dispatch center.
• Dec. 31, 1998 — Sheriff Gary Cleveland retired. He was the last Sheriff and family to live at the sheriff residence, attached to the jail. The next sheriff, Mark Grinhaug, opted not to live there. The residence was integrated into jail space with main floor offices, laundry and storage. The upper floor was also used for storage.
• 2005 — Renovations  enlarged the dispatch center, which moved the Sheriff’s office to the old residence.
• March 2010 — Sheriff’s Department and Cresco Police Department looked at a new law enforcement center and hired an architect. That figure came in at around $7 million, which was considered too high to move forward with.
• May 2013 — City of Cresco terminated the joint jail agreement when the Police Department was moved to the basement of City Hall.
• December 2015 — A task force was formed to look at options regarding the jail.
• The Howard County Board of Supervisors approved a resolution to allow a bond referendum vote to be held on May 2, for an amount not to exceed $5 million, for a 23-bed facility.
• Early 2016 — Town Hall meetings held in all communtiies to explain new jail
• A vote on a bond referendum not to exceed $5 million is set to take place on May 2, 2017. A majority vote of 60 percent is needed to pass. Absentee voting starts March 23, 2017 at the Howard County Auditor’s office.
• May 2, 2017 — Bond issue passed. A total of 828 ballots turned in, of those 508 voted yes for 61.35%. Sixty percent was needed.
• Feb. 8, 2018 — The last six inmates to be held in the Howard County jail were taken to Winneshiek County. The jail, which was built in 1882, was officially closed until the new one was built.
• February 2018 — Dispatch of the law enforcement center was moved to the old engineer’s office in the basement of the Courthouse. At the same time, the Sheriff’s office was moved to the Community Health building just north and east of the current jail.
• Early April 2018 — Old jail and Law Enforcement Center were torn down. One jail cell was saved for Historical Preservation Museum at Fairgrounds.
• May 25, 2019 — Jail Open House had over 500 tour the facilities
• June 10 or 17, 2019 — Prisoners once again housed in Howard County Jail