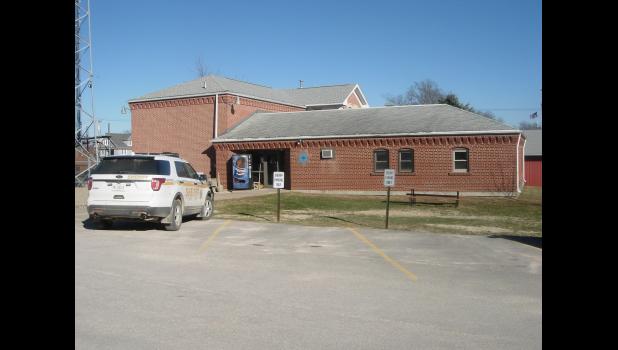 By:
By Marcie Klomp News Editor tpdeditor@crescotimes.com
Howard County - Just as the terms hoosegow or calaboose have evolved into jail or prison over the past century-and-a-half, so has the structure of the building itself. And that includes the current Howard County Jail.
Since it was built in 1882, many changes have taken place to update the facility. The following is a history of Howard County’s own “greybar hotel.”
The first courthouse in Cresco was built in 1867 and burned in1876. The present courthouse was built in 1880. It stands to reason when the county supervisors started talking about a county jail that it would be erected near the courthouse.
Hence the jail was built two years after the courthouse on the courthouse square.
As was tradition in those days, the Sheriff’s residence was attached to the jail, making it easier to process and monitor the prisoners, as well as feed them. The residence was a two-story brick home, while the attached jail was a one-story structure.
According to current Sheriff, Mike Miner, the original jail had two cells that were anticipated to hold four inmates in each. Past records indicate the building was constructed of solid brick with a 24-inch thick floor.
The cells were also utilized by the City of Cresco and were constructed out of steel bars and plates. The doors were made of steel so the sheriff could view the inmates to avoid attacks when entering or releasing prisoners. He could lock and unlock the doors to the cells by a lever and pass men in and out.
Above the cells was a water tank supplied by a force pump from a well, furnishing water for drinking and cleansing. The cells were supplied with bunks of ducking canvas.
The cost of the cells was $3,500. The jail, sheriff's residence and other costs ended up being $8,885.
During the depression, it was difficult to pay fines, so the jail was as full as it ever was until 1940.
Time wore on, and many inmates passed through the jail’s doors. In 1904, the grand jury recommended construction of a new jail, and then condemned the jail in 1906. Although the Board of Supervisors took action on a contract for a new jail no further action was taken to construct or renovate the facility until 1940, 60 years after it was first built!
At that time, the basement of the sheriff's residence was modified to accommodate additional cells. These cells were leased by the City of Cresco to house transients and inmates for criminal offenses under the town’s supervision.
The new quarters are in the west side of the basement formerly used for coal storage.
It was equipped with two cast iron cells containing two bunks each. The cells were manufactured and installed by Wentworth and Hamilton of Cresco. Each cell weighed three tons and the doors alone weigh 420 pounds each.
The second story of the jail, new entrance and renovations were completed at this time as well for housing county inmates. The second story was designed to allow the county to hold women and juveniles as necessary.
The exterior of the jail and sheriff's residence were re-pointed, waterproofed and painted in 1955.
According to the June 2, 1971 Times-Plain Dealer, from 1940-1971, the number of prisoners confined to the county jail  averaged about 30 per year.
Up until 1977, the Sheriff’s office was in the basement of the courthouse, where the Veteran’s Affairs office is located today. Then it moved to the current Assessor’s office, which had better access for the public.
According to the Nov. 23, 1981 Howard County Board minutes, “A discussion on condition and repairs of the County Jail, accordance with Jail Inspector’s report that at this time, funds are not available to bring Jail up to standards, therefore we will temporary leave closed and will transport prisoners to Chickasaw County Jail, in New Hampton, Iowa.”
In 1982, the administrative offices and E-911/Dispatch Center were attached to the existing Sheriff’s residence and jail structure for a cost of $140,000. In 1983, the jail was reopened. Included in the expansion were addition of two Howard County Sheriff, two Cresco Police, dispatch and booking room offices.
In addition, modifications to the jail were also made. Those included direct supervision with video and stainless steel toilet/wash bowls. At this time 10 inmates could be held.
Several years later, the upstairs and downstairs bullpens were modified to include a shower.
Around June 1990 the E-911 system was added to the dispatch center.
When Sheriff Gary Cleveland left office in 1998, the residence was claimed entirely by the sheriff’s department. The main floor has offices, laundry and storage. The upper floor is also used for storage.
In 2005 renovations were done to increase the dispatch center, which moved the Sheriff’s office to the old residence.
In March 2010 the Sheriff’s Department and Cresco Police Department looked at a new law enforcement center and hired an architect. That figure came in at around $7 million, which was considered too high to move forward with.
In May 2013 the City of Cresco terminated the joint jail agreement when the Police Department was moved to the basement of City Hall.
In December 2015 a task force was formed to look at options regarding the jail.
Look for Part 3 in next week’s Times Plain Dealer.  The different options the task force investigated will be explored.