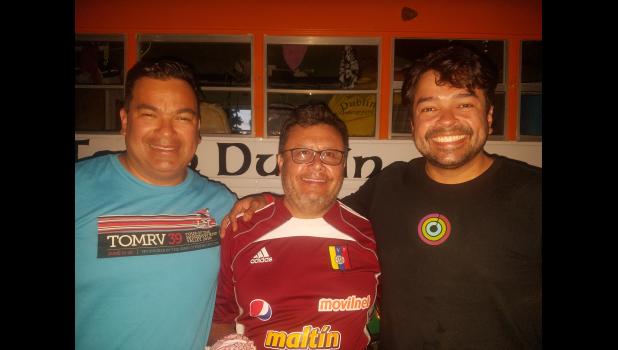 By:
Kim Soukup TPD Staff
CRESCO - Another RAGBRAI® is completed with nary a hitch. People from across the United States swelled the streets, homes and parks of Cresco on Thursday and Friday, July 27-28. But it isn’t just friends and neighbors across the U.S. who ride, there are international riders as well. Team Dublin has a mix of people from across the globe, including Venezuela, Czech Republic, Korea, Mexico and Germany.
What brings them together is the love of the ride. What also brings them together is the simple gesture of another rider on the team, who extends the invitation through the simple words, “Would you like to join our team next year?”
Team Dublin starts with Sean, who started riding with his father as a young boy, before it was RAGBRAI and was known as SAGBRAI (The Second Annual Great Bike Ride Across Iowa) in 1974.
“I started in fourth or fifth grade and rode every year until a few years after college,” he said. “I didn’t ride for a few years, and then a friend from Boston, as well as a couple of others decided to ride, and I’ve been riding ever since. It just snowballed into Team Dublin, and sometimes we have 30 people on the team.”
One of those riders, almost a newbie, is Edgar Rondon, Venezuela, now living in Las Vegas. “This is my second year and my first full ride,” said Rondon. “My friends, Marco and Daniel Prada, have been riding six years and asked if I would like to join. I bought a bike and starting riding after hearing stories about RAGBRAI. I used to ride 30 years ago and RAGBRAI inspired me to ride again.”
Daniel Prada says of Iowans, “Iowa has offered to me amazing people, hospitality and I can’t believe how welcoming everyone is.”
Of course, there are more local riders on this team. Iowans that is. One of those riders is Tracey Brun of Tiffin.
“I have done eight years now,” Brun explained. “Riding into town, I was met by a team of teenagers and they were wonderful. Cresco is very hospitable and those teens offered whatever help or guidance I would need while in Cresco and that meant a lot.”
But of course, the ride isn’t all roses and violins. Chris Burd, also of Tiffin, shared that the week from Sunday through Wednesday was fraught with high humidity and days of wind.
“Tuesday was brutal,” he shared. “There were high headwinds, but fortunately we beat the rain before it hit Charles City on Wednesday. Today (Thursday) was gorgeous, but there was more elevation so each day has its challenges.”
Chelsie Bilskemper of Iowa City was loving the ride and the entire experience. She was on her third RAGBRAI but was riding for the first time with Team Dublin. For Bilskemper, RAGBRAI isn’t just about the ride.
“I like spending an entire week biking,” she commented, “But it’s more than the ride. It’s about riding with friends, meeting new people and eating great food. But the ride can have its downs too. Yesterday, it rained all morning so it wasn’t very fun.  Each town has it specialties; their own little niche and that’s always fun to see what’s going to be happening in that next town.”
RAGBRAI, it all began with a simple thought by one man. It now involves tens of thousands of riders as they traverse from the Missouri River to the Mississippi. The magical ride can be grueling and punishing, but it is also filled with joy, determination and accomplishment. For Team Dublin, there was a little bit of all of those things in 2017.